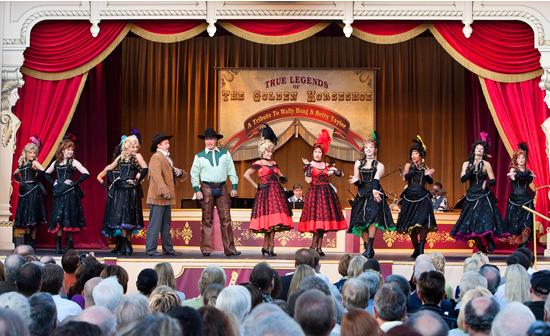 We personally didn’t know about Wally Boag and Betty Taylor until Steve Martin brought it up in the Disneyland 50th Anniversary show at the Lincoln Theater.

Wally and Betty died earlier this year…only a day apart from each other! The two were honored during a ceremony put on by Disneyland on August 18 that featured live performances and special appearances by Richard Sherman, Tom Staggs, and two very special guests – Dorothy Fields (Betty Taylor’s sister) and Heather Dinkins (Wally Boag’s sister).

From those shorts scenes that I saw of Wally and Betty performing, I could see how they changed entertainment at the Resort forever. They were an act that performed nightly at the Golden Horseshoe back in the early years at the Park. It was truly a tough act to follow and hopefully Disneyland will bring back that talent and showmanship that Betty and Wally showed every time.

See a full clip of one of their sketches below. Rest in peace Wally and Betty and thanks for the laughs.