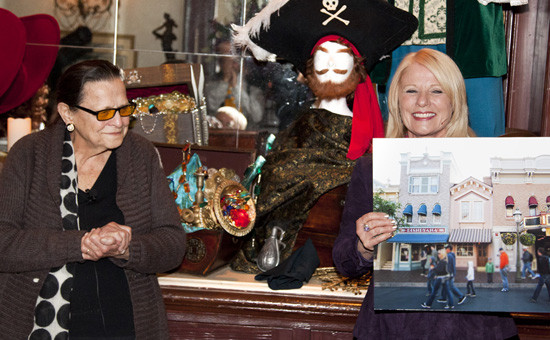 As we reported earlier this year, Disney has given its most recent Main Street Window to a very special person. Her name is Alice Davis and she certainly deserves this honor.

For those of you who do not know what we’re talking about, here is some background about the Main Street Window honors:

The tradition of dedicating windows at Disneyland began more than 50 years ago when Walt Disney dedicated many of the windows along Main Street, U.S.A. to individuals who helped make thepark a reality. It is a long-standing tradition to continually honor individuals who have had a significant impact on Disneyland by dedicating a window to them. On the windows, honorees are made the proprietors of fictional businesses, usually relating to their occupation or hobby, which somehow influenced the creation or operation of thepark.

To date, more than six dozen people have been honored in this manner. A list of all window recipients is available upon request.

Alice herself has done a lot for the Walt Disney Company, specifically in costume design from Sleeping Beauty to It’s a Small World. Her works have made her a Disney Legend and now she will be receiving the highest honor any Disney Cast Member can receive – her own window on Main Street USA!

We have been given the privilege of covering the window dedication ceremony THIS THURSDAY, 5/10 in the morning. Be sure to join us on Facebook and Twitter for live pictures and reports straight from the ceremony. Come celebrate this wonderful person with us!