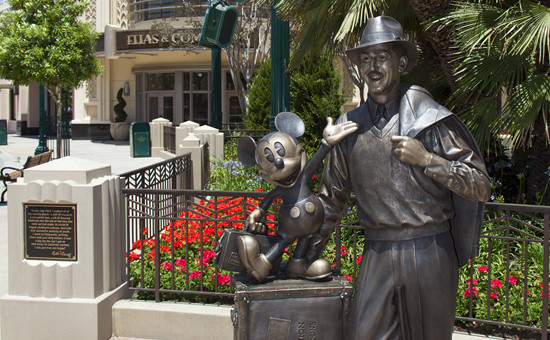 Last year at the D23 Expo, DisneyExaminer revealed a statue that would mimic the “Partners” statue that is in the center of Disneyland Park.

Entitled the “Storytellers” Statue, the new icon in Carthay Circle at the end of Buena Vista Street is something that you shouldn’t miss as you make your way around the new, re-imagined Disney California Adventure Park. Next to the statue is a plaque that tells the story of Walt’s arrival in Los Angeles back in 1923 in his own words:

It was July 1923. I packed all of my worldly goods – a pair of trousers, a checkered coat, a lot of drawing materials and the last of the fairy tale reels we had made – in a kind of frayed cardboard suitcase. And with that wonderful audacity of youth, I went to Hollywood, arriving there with just forty dollars. It was a big day the day I got on that Santa Fe California Limited. I was just free and happy!

It is such a fitting reminder that without Walt, it couldn’t have been “all started by a mouse.”