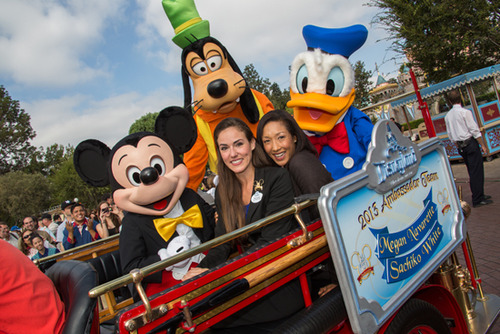 This past Monday, Disneyland Resort President George Kalogridis held a ceremony in front of Sleeping Beauty Castle to present the new Ambassadors of the Disneyland Resort for 2013-2014 Sachiko White and Megan Navarette!

Their new roles as ambassadors, just like the ambassadors before them since Walt Disney started the tradition back in 1965, will be to represent the 23,000 Cast Members who work at the Resort and act as “emissaries of goodwill” ensuring that Disneyland has a positive impact on the world. Specifically, they will visit hospitals with Disney characters, go to special promotions and cast recognition ceremonies. They will also be spokeswomen for the Resort, and host dignitaries and other VIPs.

Navarette and White have been Disney fans since they were young and are excited to serve in this respect. They were chosen out of a pool of 80 applicants and are also Orange County residents, just like us here at DE!

Let’s wish Sachiko and Megan the best as they begin a new journey of spreading the magic outside of the Parks!