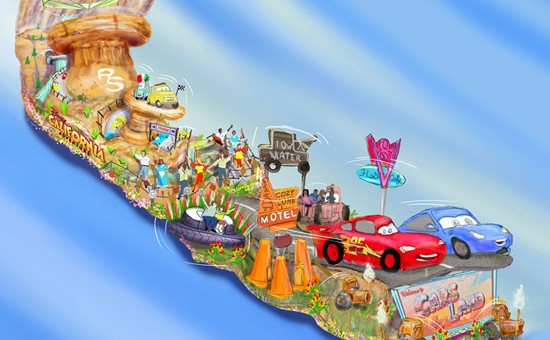 After an absence from participating in the annual post-holiday Southern California tradition, the Disneyland Resort has formally announced their participation in this year’s Rose Parade!

For those of you who do not know what the Rose Parade is, its actually a traditional parade…with lots of roses! Each of the floats you see is completely made of earthly materials which include an rose types that you never even heard about! It’s really something you should see once in your life.

This year’s parade theme is “Oh, the Places You’ll Go.” We’re guessing a Dr. Seuss reference, but the theme that Disney’s float will have has taken that theme to a new meaning. Oh indeed, the places you’ll go…via ‘Cars’!

Specifically, the float will feature everything that Cars Land has to offer! From representations of the attractions to the actual residents of Radiator Springs like Mater and Lightning McQueen, this float will make you want to visit Cars Land (we’re thinking that was the goal for Disney since the beginning).

The concept art doesn’t do justice folks, so this New Year’s Day, try to make it out to Pasadena, California in the morning or jump up early to watch the 124th Rose Parade on TV! Then quickly make your way to Cars Land. You’ll want to.