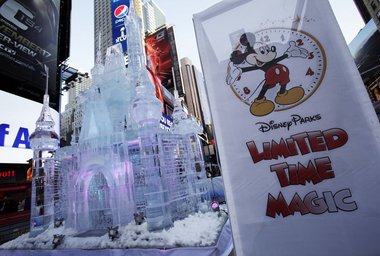 Disney Parks. You don’t need much to get people through their gates.

But for those who do go through those gates often, you’ll know that there needs to be some incentive every now and then to keep the Disney magic “fresh”.

Well, Disney has heard that plea loud and clear folks and it sure looks like we’ll be headed back to the days of ‘Year of a Million Dreams” and some unexpected surprises!

This past week, Disney announced their new marketing campaign for 2013 called “Limited Time Magic”. As the name suggests, Disney Parks around the world will have the opportunity of hosting very special, limited time experiences…and they sure do mean limited. As part of the announcement, they put a 3-story tall ice castle in the middle of Time Square in New York City which will soon be gone due to the warm weather there right now.

What an incentive, right folks! Aside from the giant ice castle, Disney also announced some of the other limited time festivities coming to the Disney Parks in 2013. They include –

For any Disney fan/not-so Disney fan, expect great things. We’re hearing great things and it all will soon be revealed in January of 2013!

What do you think, folks? Will these limited time specials get you through the gates in the coming year? Sound off in the comments below!