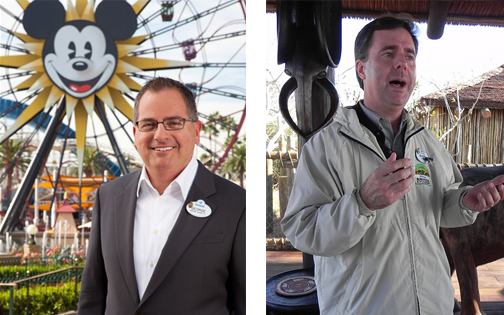 In addition to a “new” President being sworn in for this nation later this month, Disney Parks and Resorts yesterday named their new presidents for the Disneyland Resort and Walt Disney World.

We’re certain that many of you don’t know who these people are (like us prior to us doing research on them), but what you do need to know is that both of these men are highly dedicated, hard working career professionals who have proved themselves through decades of experience working for The Walt Disney Company, specifically the Parks and Resorts division.

You can expect that these changes shouldn’t effect your experience when you visit the WDW or DLR. In fact, we’re looking forward to seeing the Resorts grow with new leadership in place.

After all, fresh leadership may lead to fresh magic for all of us!

On behalf of all of us at DisneyExaminer, we’d like to wish both Mr. Kalogridis and Mr. Colglazier the very best as they begin their new roles.