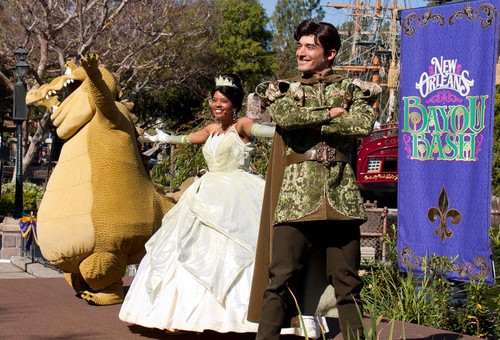 The Disney Parks’ 2013 marketing promotion is off to a great start with the first in a series of limited time offerings at U.S. Disney Parks that included the debut of the “A Salute to the Golden Horseshoe” shows and Year of the Ear offerings at the Disneyland Resort.

The Limited Time Magic offerings are continuing on now at Disneyland with the 3rd event in the series that may seem familiar to all of you. The New Orleans Bayou Bash, which was an event that debuted last year, will return to New Orleans Square in Disneyland Park.

The event, which celebrates Mardi Gras the more kid-friendly way will again have character meet-and-greets from Princess Tiana and Prince Naveen from “Princess and the Frog,” jazz bands, and more delicious foods to get the party started!

The New Orleans Bayou Bash will happen from 10 AM to 6 PM on the following days:

The event last year was pretty fun and we hope it has the same, if not more of an impact this year now that it’s part of a highly-advertised marketing campaign. Hope to see ya’ll ‘round the Bayou for the next 4 weekends!