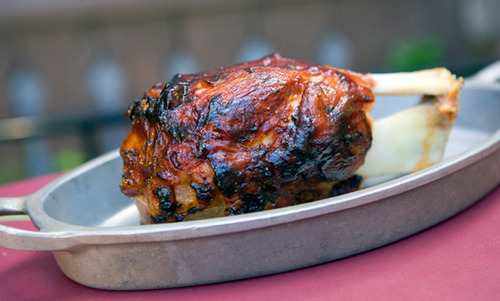 After debuting in Gaston’s Tavern in New Fantasyland at Walt Disney World’s Magic Kingdom park, the now fan-favorite slow-roasted pork shank has found its way to the West Coast at the Disneyland Resort! The West Coast version of the pork shank is a little different than WDW’s in that it features a tangy BBQ glaze that has a kick!

The new pork shanks cost $9.99 each and at 22 ounces of pure pork magic, its large enough to share. They can be found at Edelweiss Snacks or at Troubadour Tavern in Disneyland Park’s Fantasyland. Also for a limited time (magic), the shank will also available on the menu at the new guest experience Woody’s All-American Roundup at Big Thunder Ranch Jamboree in Frontierland until September 2. Try it and let us know how you like it!

We’re Disney Park food lovers. Do you have a favorite Disney Parks food? For those who have tried the pork shanks, do you think it ousts the world-famous turkey leg? Comment and say your peace!