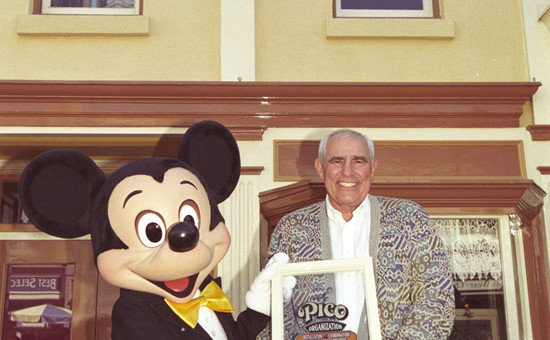 This man has been called an “Imagineering legend” with his work being seen at the 1964-65 New York World’s Fair, every Disney Theme park to date, and even the Disney Cruise Line. Today we take a closer look at the man that is Orlando Ferrante and his 40-year career with Walt Disney Imagineering which got him his Main Street USA window.

Orlando was born on Sept. 24, 1932, in Los Angeles. He won a scholarship to USC to play football and graduated with a bachelor’s degree in business administration. He served two years in the U.S. Navy and played professional football as an offensive guard for the L.A. and San Diego Chargers in 1960-1961.

After all that, Orlando decided to join Walt Disney Imagineering in 1962. He began as an expeditor and his first project was to oversee the installation of the first Audio-Animatronics attraction at Disneyland, Walt Disney’s Enchanted Tiki Room. Marty Skylar, former vice chairman and principal creative executive at WDI once said,” I think his years playing football gave Orlando a strong sense of teamwork. He didn’t mind getting dirty to get the job done. And as result, he was well loved and remains well loved by those who worked with him.”

From the 1960s to the 1990s, Orlando continue to work on innovative and imaginative ways to create guest experiences at Disney Parks. He established a new department in Imagineering called Project Installation Coordinating Office (or PICO) which became the standard on how Imagineers installed projects keeping in mind a guest’s point of view.

For his many achievements, Orlando was presented with a window on Main Street, U.S.A. on March 18,2003.

Orlando was also named a Disney Legend that year. You can find his window above the Market House on Center Street, which reads: The PICO Organization, Installation & Coordination of World Class Projects, ” We Never Sleep- In Any Time Zone,” Orlando Ferrante, Founder.

More stories behind the Main Street USA windows can be found HERE. Have you found more appreciation for the individuals for which these windows are named?