The 2013 D23 Expo is well underway and we hope that many of you have been following our coverage of the Expo on our official coverage page. If you have, you’ve probably noticed one thing that you might find missing from the “bigger” scene of things – new news on what’s going on at Walt Disney Parks and Resorts!

With no big keynote presentations being given by the theme parks division of The Walt Disney Company this year, many have been wondering why. As speculation says there are many things that have yet to be announced, we would also have to agree as our sources have confirmed that many things are coming to fans of Disney Parks and Resorts with announcements happening probably within the next few weeks, so don’t fear!

New things (especially at Disneyland Park) are near…

But specifically at the D23 Expo this year, Walt Disney Parks and Resorts are celebrating a milestone that’s worth noting and that is the 60th anniversary of Walt Disney Imagineering! The group of skilled and imaginative individuals who dream up and create the various attractions, shows, and resorts that we’ve come to know and love are celebrating this milestone with an inside look at the how they do what they do.

The Journey Into Imagineering booth at the Expo is basically a very visual walkthrough where guests can take a recreated tour of Walt Disney Imagineering’s headquarters in Burbank and see the process of creating things for Disney’s theme parks and resorts. Take a look at the video below for a video overview of the booth!

In addition to the booth, many real Imagineers were on hand giving guests insights as well, including top Imagineers including Tony Baxter, who we told you about a few months ago. In a surprise after one of his presentations, he was notified by Disney Parks Chairman Tom Staggs that he would be getting a coveted Main Street USA window dedicated to himself for his over 40 years in service to Imagineering. 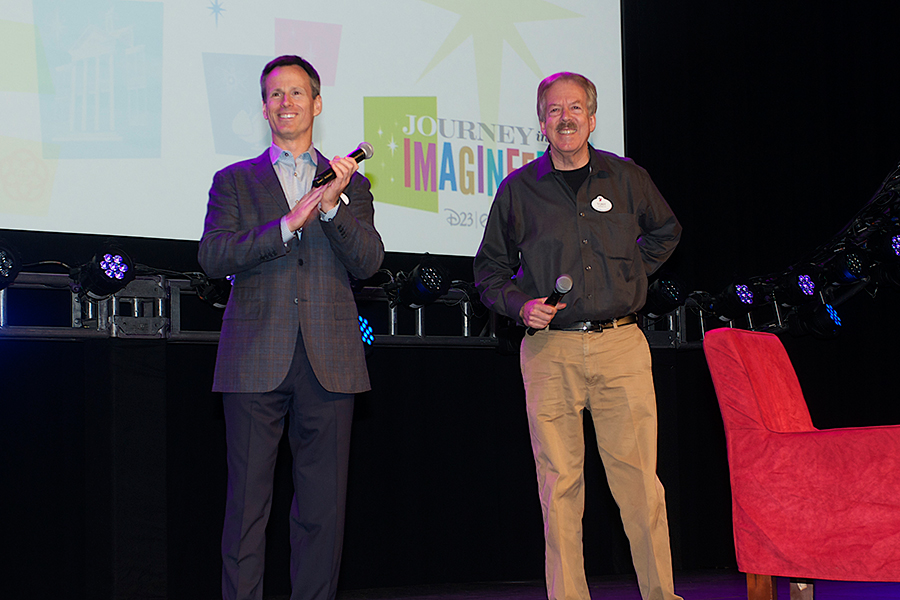 With so much passion driving Imagineers to create these magical experiences for years, Tony’s example and the booth at the D23 Expo are certainly a welcome celebration to a division of a Company that, although quite secretive, deserves our respect, attention, and gratitude!

UPDATE 8/12 – During one of the 60th anniversary Imagineering presentations at the D23 Expo, Disney Parks Chairman Tom Staggs also debuted a trailer for an upcoming documentary that looks at all the insides and outsides of Walt Disney Imagineering. You can watch the full trailer in the video below –

We’ll be bringing you more on the 60th anniversary of Walt Disney Imagineering as well as any other new breaking news surrounding Walt Disney Parks and Resorts only on our official D23 Expo Coverage Page throughout the weekend. Be sure to check out the other things that are going on at the Expo as well while you’re there!