When we were at the D23 Expo just a few weeks ago, our friends at Disney Interactive presented a whole bunch of new digital pieces of magic. From new digital shorts to new games, they really wanted to make sure they made a statement after years of adversity and being known as the “underdog” Disney business.

One of the more interesting things that they showed off during their only presentation on the last day of the Expo was something called the Disney Animated app. With such a general name, we weren’t too intrigued with the iPad-only app…until they demoed it.

The Walt Disney Company has its roots in animation starting with Walt himself being a successful creative who aimed to take animation and make it a means of unparalleled entertainment. With this new app, you are now able to get an unparalleled look at Disney’s animation history and continued progress in creating new story-filled movies.

When we say unparalleled, we really mean it. Nothing like this has been done before. Disney Animated is split into 4 main sections: The Story of Animation (describing the step-by-step procedure in making animated films the Disney way), Interactive Workshops (interactive modules that allow users to play with the technologies that animation possible), and Disney Animation History In One Place (where all 52 released feature animated films have been put into this large color chart. It’s beautiful. Just look at it for a few hours when you buy the app. It can’t be described fully.).

The app itself has so many more interactive, fun, and informative ways to get the message across that Disney animation has come a long way and will continue to make great films that we’ll continue to love and delight in. You can expect developers to update the app as well when new animated features are released to give users an unending magical experience.

Disney Animated is currently only available for the iPad and is priced at $13.99 in the App Store.

UPDATE 12/12: Disney Animated has been updated with new behind-the-scenes look at Disney’s “Frozen”! 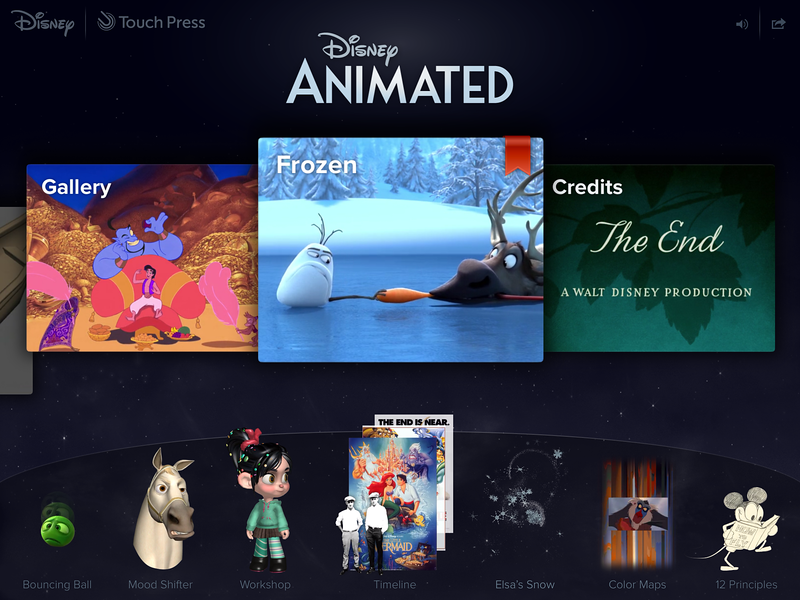