Often times when we reflect on all the Disney experiences we’ve had running this media operation, we can’t help but reflect on if Walt Disney never had established himself and what he stood for, we would be out of a job. DisneyExaminer would be nonexistent. Walt Disney would have never become a household name for generations.

Can’t you imagine that? We certainly can’t which is why we’re so grateful that Mr. Disney had the dream and courage to pursuit. Many have reflected on that and particularly that man and great things have come about doing so! Later this year, we’ll be seeing Walt Disney portrayed for the first time ever in an untold of how he single-handedly brought a magical nanny from London to life in “Saving Mr. Banks.” But we’ve stumbled upon another creative endeavor that pays tribute to Walt…in the form of a musical. 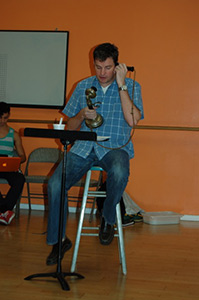 Yes, a musical! “When You Wish: The Story of Walt Disney” is a full broadway-style musical complete with original music and script. The playwright, a Disney fan himself, wanted to tell a biography of this magical man in a more unique way.

“Anyone who knew Walt Disney, or who has seen footage of him, would agree that he was a showman, so it seemed only natural to me that his story should be told in some form of entertainment – bringing to mind his familiar quote: “I’d rather entertain and hope that people learn…than teach and hope that people are entertained.” – Dean McClure, playwright

He’s certainly right and if anything, who wouldn’t want to hear about the origins of their passions?! If that’s enough to get you wanting to watch this musical and you’re in the Southern California area, you can go ahead and do so right now!

It’s currently playing at The Freud Playhouse at UCLA for a limited engagement ending November 3, 2013. Tickets and more information on the musical can be found by clicking HERE.

Will you be seeing “When You Wish” at UCLA? Have you ever thought of having someone create a musical about Walt Disney? Do you think this production will be good? Let us know in the comments.