Growing up, there was one game that got me hooked. It was an online multiplayer game that allowed players to virtually walk through a virtual Disney Park and do things that were themed to specific Disney Parks’ attractions and shows. You might know this awesome game as VMK: Virtual Magic Kingdom.

VMK was more than a game for any Disney fan, but a way of bringing Disney fans together for a clean time of fun that revolved around the iconic Disney theme parks and their experiences. For instance, there was a fast-paced game that was modeled after Disney’s firework shows and a game that had you catch the 999 happy haunts in the Haunted Mansion. One of my favorite games had to be a strategic game modeled after the Pirates of the Caribbean (POTC) attraction where players could shoot it out in their own pirate ships. The gameplay was too fun and ever since VMK closed back in 2008, I certainly have missed playing all these games including my favorite pirate ship battles.

But good news for those who played VMK and loved the POTC game like me! Disney Interactive has brought back that game in the form of a game that uses Facebook as a platform. Pirates of the Caribbean: Isles of War is the new title of the game, but the gameplay is pretty much the same as the one that was on VMK. You still get to shoot it out with your friends in a fast-paced environment that places you in the world of Captain Jack Sparrow and his other pirate clan. 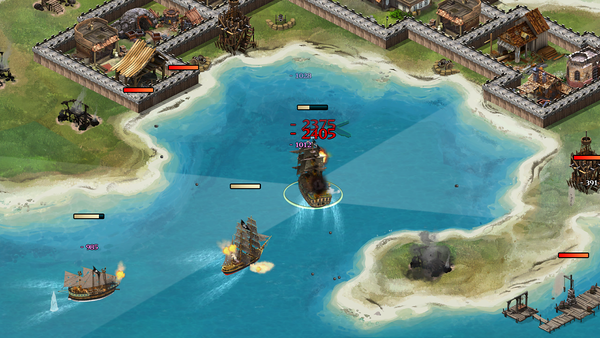 The game is now available for play by clicking HERE (you’ll be redirected to Facebook). If you didn’t get the chance to play the game on VMK and are looking to kill some time, be sure to play Isles of War. You’ll get “hooked” rather easily.

Do you all remember the POTC game on VMK? Do you miss VMK? Are you glad some of the game has made it back like Isles of War? Will you be playing? What do you think of the new game? Comment below!