For many of us in Southern California, there are many things that herald in the winter season: the colder weather, the foods, and of course the decorations and merriment that go up at the Disneyland Resort. But there’s another thing that is synonymous with the season – KOST 103.5 FM. 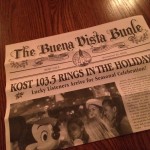 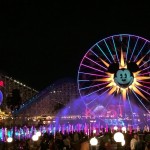 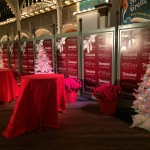 Southern California’s local radio station known for playing “soft rock with less talk” has had a terrific partnership with Disney for many years now and one of the perks of being so connected with the Mouse are things like what we got to experience last night – a private party that took up all of Disney California Adventure Park! Yes, it was true – DCA was closed for us and a few other KOST listeners who were fortunate enough to win tickets to the holiday kickoff party.

The weather in the area was due for rain, but the clouds parted ways for a magical evening with lots to do. Even with a few thousand in attendance, the Park was still very empty as was evident with the nonexistent lines for attractions. Throughout the night, KOST Christmas tunes pumped throughout the Park as guests made their way to their favorite ride, meeting with Santa, or the private showing of “World of Color – Winter Dreams.” Party guests also got the chance to meet with some of their favorite talent from the radio stations for photos and autographs. 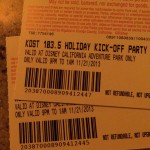 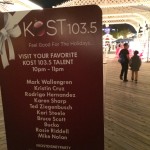 We had the opportunity to catch up with Mark Wallengren and Kristin Cruz, hosts of the KOST Morning Show as well as host Bruce Scott who shared their exciting histories with Disney and the popularity of these parties (which have been happening for over a decade now). Mark even shared with us EXCLUSIVELY that next year’s party will be at Disneyland Park where they had their first party! Take a look at that interview below –

Overall, it was another magical evening at Disney California Adventure Park made even more magical thanks to our friends at KOST 103.5 FM! Be sure to start listening to the “Official Holiday Music Station” when you’re in Southern California (or wherever you are) this season as you make your way to the Merriest Place on Earth.

Our special thanks to KOST producer Rodrigo Hernandez as well for helping put together our interview!

For those who live in Southern California, do you listen to KOST (especially for the Christmas music)? Did you make it into their holiday kickoff party this year? What is the best part of having these parties? Let us know in the comments!