The holidays are all about giving: we (finally) gave thanks because we ought to give thanks in everything and for Christmas we’ll be giving again as we pass out the presents, kind words, and food once again…but we would be remiss if we didn’t recognize the reality around us and the many, many people around the world that won’t have any of that for the holidays. We are a fortunate few and we know that receiving is only had when we give, right?

Yes and our friends at the Disneyland Resort know that all too well as in years past, they would have U.S. Marines stationed at the entrance of the Disneyland Park during past Cast Member holiday parties to collect toys for children who might need a little more joy this season. What became known as the “Toys for Tots” campaign became Walt Disney’s favorite charity and did all he could to make sure every child had a magical Christmas. He even designed the logo for the campaign seen above! 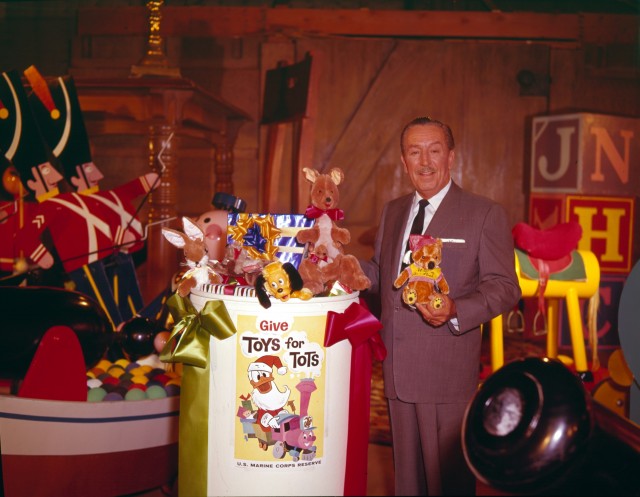 This year, Disneyland will again play host to the toy drive by involving anyone and everyone who has the heart to give. From December 1 – 14, various retailers, including our Partners La Brea Bakery Café, Earl of Sandwich, and Ralph Brennan’s Jazz Kitchen at the Downtown Disney District, will be collecting new, unwrapped toys valued at $10 to be given to children in local charities in Orange County, California.

And for tradition sake, U.S. Marines and even the Anaheim Fire Department will be on hand to accept donations on December 7 and 14 from 11:30 AM  – 5 PM near the AMC Theaters.

Have you given to Toys for Tots before? Would you rather give or receive this Christmas time and why? Let us know in the comments below!