Even prior to Disney buying Lucasfilm, we know that the worlds of George Lucas have clashed rather well with the worlds of Disney. Whether that be taking a tour of a forbidden temple in Adventureland or just watching drama unfold in those galaxies, the partnership between Lucas and Disney have reminded us of the great stories that the two create. As much as we love those stories, it’s quite funny that we (a good majority) don’t remember how they play out or what happens next. What you will remember most of all though is something we think is as equally important as the plot – the plotting of notes.

Musical notes, that is! And nobody has done it better than Mr. John Williams. Just yesterday evening, our friends at the Pacific Symphony Orchestra based in our very own Orange County, California had opportunity to play some of the pieces from his works with Lucas. What made the evening even more special was that the orchestra was under the direction of none other than John Williams himself! 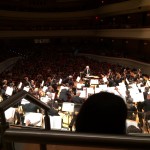 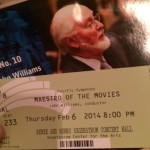 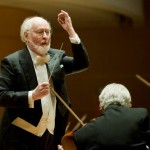 We had the unbelievable privilege of being in the audience as it all played out yesterday in the beautiful Renée and Henry Segerstrom Concert Hall and let us be the first ones to tell you that the night was way more than any of us could imagine…but imagine if you will with us! The magic of a live symphonic music playing the tunes of some of the most well-known music in the world conducted by the talented man who wrote it all. It doesn’t take much for you to get wrapped up in it all. Did we mention that we had seats that had us staring right at John the whole time?

As Mr. Williams conducted pieces from “Harry Potter”, “Indiana Jones”, and of course “Star Wars”, we couldn’t help but notice the man and his passion for music. We’re sure that he’s conducted many orchestras all which have played his music, but for some reason it looked like he was affected by it just as much as we in the audience were affected by it last night. From the swelling melodies and joyful marches all the way to the tearful laments, John felt and made us feel. It put us in the Millennium Falcon as we whizzed around the astroid field and into Indy’s next adventure. You just had to close your eyes and you were there!

As the concert ended and we gave a rousing applause to Mr. Williams and the fantastic Pacific Symphony, the feeling of wanting more set in, but we know our wait won’t be long until the next time we hear the great music from this great mind. John will be writing the score for “Star Wars: Episode 7” due out next year, so be excited for what’s to come from the “Maestro of the Movies” next.

It’s John Williams’ birthday this Saturday, so be sure to wish him a happy birthday in the comments below!