Wacka-wacka! The newest Muppet movie “Muppets Most Wanted” comes out in theaters March 21 and for some, the Muppets are like old childhood friends. Others know them from the 2011 film, still others ask themselves, “wait – the Muppets are still a thing?”

They are definitely  still a thing, and this newest movie looks like it’s going to be one of the funniest ones yet! For your convenience, we’ve researched some facts about these comedic characters and compiled them into bios for some of the major Muppets. You’ll want to get acquainted with them before you watch the new movie, so here’s some facts about the most popular pals in the first part of this two part series!

Kermit the Frog is the main character of the Muppets. He was played by the Muppet creator Jim Henson until his death in May 1990; Steve Whitmire has performed him since then. He is known as the showrunner and host of The Muppet Show. He was first introduced in 1955 on Jim Henson’s TV show, Sam and Friends. His life started in the swamps of Louisiana, but his aspiration to entertain people and make them happy pushed him to head to Hollywood to pursue a career in the entertainment industry. He met the other Muppets along the way like Fozzie Bear, who later became his best friend. As the cool-headed leader of the Muppets, he has to deal with the constant chaos brought upon by his cast and try to maintain the peace.

Miss Piggy acts like a diva, and is constantly driven to achieve fame. Kermit the Frog and Fozzie Bear met her while she was competing in a beauty contest during The Muppet Movie. She fell in love with Kermit the moment she laid her eyes on him at the contest. Soon afterward, Miss Piggy decided to join the rest of the Muppets on their journey to Hollywood. Since then, she constantly smothers Kermit with affection, which he usually greets with discomfort. She has a short temper and can sometimes show her violent side by using her karate skills. Although Miss Piggy can be vain, she is a multi-talented actress who can sing, dance, and model, among other things. 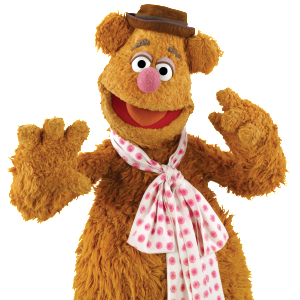 Fozzie Bear is Kermit the Frog’s best friend and was the first Muppet that Kermit ran into during his journey to Hollywood. After seeing Fozzie serve as a stand-up comedian at the El Sleezo Cafe, Kermit asked Fozzie to join him. Fozzie serves as the comedian on The Muppet Show, although he tends to deliver bad jokes. His catchphrase is “Wocka Wocka Wocka!” He sometimes sings and dances on the show, and has had stints as a magician and a ventriloquist.

The Great Gonzo is the daredevil of the cast. He is shown performing dangerous stunts on The Muppet Show, which often go awry. He also plays the trumpet. His species had always been a mystery, until it was revealed in Muppets from Space that he is an alien. He decided to join Kermit the Frog and Fozzie Bear when he ran into them during their trip to Hollywood. Gonzo also has a girlfriend named Camilla the Chicken.

Animal is the chaotic musician of the cast who plays drums. While traveling to Hollywood, Kermit the Frog ran into Animal’s band Dr. Teeth and The Electric Mayhem. Animal is wild and likes to play loud music. He also has a large appetite and can sometimes be seen eating non-edible things, such as chairs. Animal sometimes speaks incoherently and instead shouts out short phrases.

We’ll be back with more Muppet bios soon, so be sure to check back here for part 2!

Will you be watching any Muppet TV shows or previous films soon? Do you still think the Muppets are still relevant to our lives? Do you think a new film like “Muppets Most Wanted” will change your perception of these furry friends? Comment below!