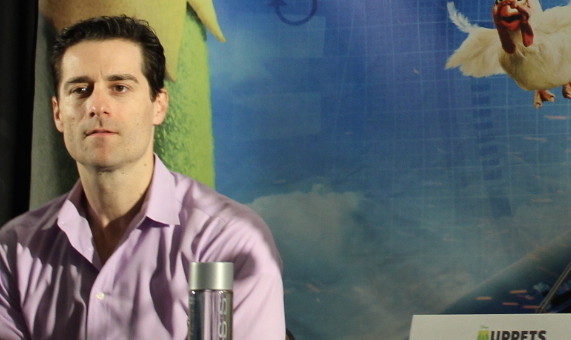 That really was the mindset of producer Todd Lieberman when we had the chance to chat with him about the newest Muppet flick. Building on the success of the first Muppets film, Lieberman and his fellow filmmakers wanted to bring the charm and emotion of the already beloved cast, but add even more fun to the mix by creating a new story that would bring the Muppets into uncharted territory.

“The great thing about the Muppets is that their every presence is its own story,” Lieberman said. “You can create something totally new and still feel comfortable because you know these characters.” In the new film, that’s certainly true as we do meet Kermit, Miss Piggy, and the rest of the gang again, but in new places as they go on a world tour bringing their beloved show to new audiences. By a simple change of setting and plot lines, the fun and love these characters bring make a new story…which wasn’t really easy to come by, but a whole lot of fun to do.

“When Disney told us that they wanted to do a sequel, we’re were excited to just build on the success of ‘The Muppets,” he said. “We’re just having fun.” You can see that fun through the work that Lieberman and his talented team did before, during, and after production. From securing an all-star comedic cast to the incredible cameos (yes, there are a lot of them!), Lieberman hoped that his efforts and work turns out. “If Disney loved it and our audiences loves it, I know we’ve done our job.”

You can find out yourself if that fun job was done to your liking when you see “Muppets Most Wanted” in theaters on March 21!

Would you want Todd’s job as producer on a Muppets movie? Why? Who would you cast and what story would you want to tell with the famed puppet ensemble? Let us know in the comments!