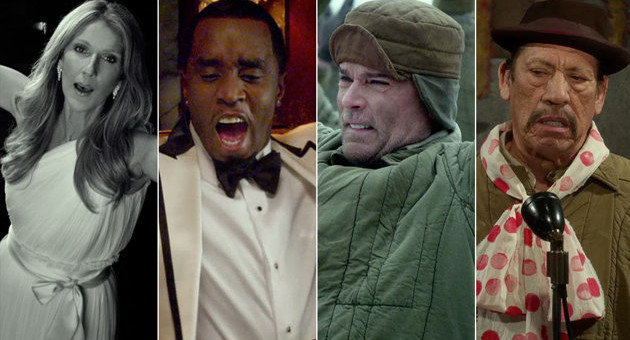 Just like most Muppets productions, you have your handful of famous people making appearances in them…but a handful might not just be enough! In “Muppets Most Wanted“, you’ll see the main stars of the film like Tina Fey, Ricky Gervais, and Ty Burrell, but be sure to keep an eye for…

Many celebrities want to have cameos in the Muppets films and TV shows, but only a few are selected each time. According to producer Todd Lieberman,  a list of celebrities who are considered for cameos is created as the script is being developed. The members of this list change and interchange as the creators begin to both approach celebrities themselves and  be approached by celebrities who personally request a cameo. At a press conference, the creators revealed that they constantly receive requests for cameos.

“A lot of people approach me just on the streets and asked if they could be in the movie… One of them was Lady Gaga,” director James Bobin said.

Hence why Lady Gaga, and many others, have been included in the latest Muppets movie. As you can see from the extensive list above, the types of actors who are included represent a wide range of personalities and styles. These various celebrities volunteer for the sheer honor of working for the Muppets as well as for sentimental reasons; for example, Tina Fey and Salma Hayek are said to have agreed to work on the movie after being urged strongly by their children. Ty Burrell was also motivated to star in the movie for his children.

“My kids are still so unimpressed by me. I’m banking this one… I’ve learned this already from other, any other kids project that it’s, if I wanna save my ego, I’m gonna bank this,” Burrell said.

Have you seen “Muppets Most Wanted” yet? (If not, here’s our SPOILER-FREE review) If you were given the opportunity to choose which celebrities would have cameos in a Muppets movie, who would you choose? Comment below with your answer!