Surely everything that comes from the classic Disney attraction is small: from the way the name of it is stylized, the lyrics to its catchy song, to the dolls that sing them as your boat floats by. But the impact of ‘it’s a small world‘ has certainly made a big impact on our world!

Today we recognize the 50th anniversary of the world premiere of the attraction that Walt Disney and his dream team of Imagineers created for the 1964 World’s Fair and eventually for their theme parks. Disney Parks around the world where the attraction is located celebrated the occasion with festivities to mark the anniversary.

At Disneyland Park, songwriter Richard Sherman, who wrote the song with his late brother Robert, lead a Google+ Hangout in front of the attraction and then went on to lead people in the park in a sing-a-long of his famous song. Generations have grown up with the attraction and the tune, but the legacy has spread to even more mediums that expose new generations to something classical Disney. 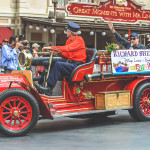 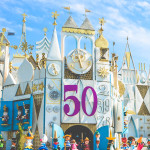 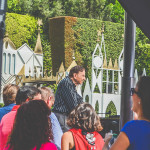 Today through video games (like “Epic Mickey”), TV shows (like “The Simpsons”), and recently a new online video series from Disney Interactive of the same name, the original idea of an entertaining boat ride that Walt Disney came up with all those years ago has grown to be much more to even more people. And that was apparently the point. “You’re not just going on a ride…it’s not just that,” songwriter Richard Sherman said. He went on to say that people are touched by the attraction and its message of unity.

Now 50 years later, that message has stood the test of time in more than one yet beautiful way. Little did Walt know that his ‘small world’ back then would affect our big world so much now.

Everyone at DisneyExaminer wishes ‘it’s a small world’ a happy golden anniversary! Be sure to visit the official celebration website at SmallWorld50.com to create your own doll and record yourselves to be a part of a global sing-a-long that’ll benefit United Nations Children’s Fund or UNICEF, the same organization that the attraction was created for.

How have you been affected by ‘it’s a small world’? Has that message of unity help you live the life you live today? Let us know in the comments!