Earlier this morning, we were in Hollywood to learn more about the next version of Disney’s boldest gaming initiative yet. Disney Infinity, which debuted to the world just over a year ago in Hollywood as well, was promoted as “bold” because of what it aimed to do – unite the characters and worlds (and everything else in them) of Disney and allow them to be “played with”. That playing was created through a very customizable video game interface that allows gamers to be “in” the Disney story itself. That Disney story has changed with the revelation of new characters and worlds in TV and movies…including the Marvel universe.

At the press event in the beautiful and historic Cinerama Dome, both Disney and Marvel executives were on hand to reveal what new things were coming to the game in version 2.0. The inclusion of the Marvel worlds and characters was the centerpiece of the presentation. Director Nick Fury (Samuel L. Jackson) opened up the event with a special video transmission that gave way to colleague Agent Coulson himself Clark Gregg. 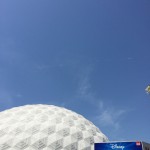 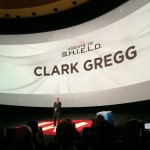 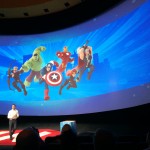 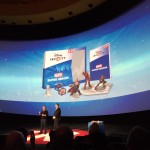 After his quick welcome, he then introduced Joe Quesada, the Chief Creative Officer of Marvel who gave a speech on how Marvel’s storytelling made it a perfect addition to the Disney Infinity game. He then showed us a gameplay trailer featuring Iron Man, Captain America, the Hulk, and the rest of the Avengers. Our quick eyes also spotted Loki, Spiderman, and the Green Goblin in the trailer as well for a future release.

Executive Producer of Disney Infinity John Vignocchi then showed us some of the other improvements and enhancements coming to the game that were made after listening to player feedback. He emphasized that the characters (including those newly added Marvel ones) would be true to their character with ways to level up and achieve special attacks and moves that would make each more unique. He also noted that the famous “Toy Box” mode, where gamers can take any of the Disney characters and worlds and build them into their own worlds, would also get a lot of enhancements including a structured play mode where gamers can turn their worlds into fun games. 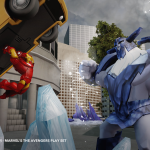 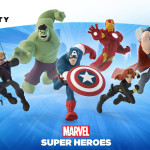 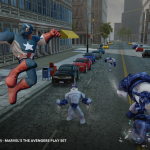 In addition to the new, Vignocchi also noted that everything from 1.0 (the power base, figures, power discs, and even Toy Box creations) would be compatible with the new version. He also announced that the game will be also be available for XBOX One and PS4 systems.

Disney Infinity 2.0 indeed includes a lot more to solicit a version bump. From the addition of the Marvel elements to gameplay enhancements, all this points to something that was heavily emphasized from Infinity’s initial debut – that it would be endless in what it could bring players. And those players seem to agree with the game outperforming in revenue compared to all other video games in 2013 according to Disney Interactive President Jimmy Pitaro. It’s all of this, as well as continued backing by the entire Walt Disney Company and estimated $500 million in global sales so far, that will continue Disney Infinity into infinity and beyond yet again.

Disney Infinity 2.0: Marvel Super Heroes will be available this fall. More detailed information on the game itself can be found below –

Select Power Disc descriptions are below:

Will you be getting Disney Infinity 2.0? Are you happy that Marvel has made another appearance on another Disney product? Have you even heard of Disney Infinity before? What do you think of the concept? For those who’ve played Infinity already, what are your thoughts on the enhancements and new features? Comment below!