When does a cartoon become something more than mere entertainment? Can a “children’s movie” teach a lesson, or recognize unsung heroes?

These questions and more were answered when the Walt Disney Studios presented a Press Day on June 12th for their upcoming movie Planes: Fire & Rescue. The events revealed not only the process that led up to the movie’s creation but also how the film goes above and beyond in order to teach lessons valuable to both children and adults. 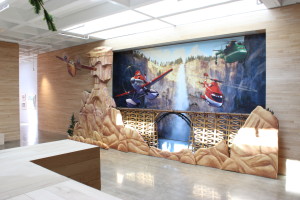 “Planes: Fire & Rescue” takes place just after the first “Planes” movie. Unlike the first movie, however, this Planes film revolves not around racing, but about saving lives.

This time, Dusty must learn the art of piloting rescue missions as he is thrust into the world of aerial firefighting. With a new cast of other firefighting vehicles, Dusty learns the importance of humility and second chances.

The story primarily takes inspiration from the real life firefighters who battle against the constant threat of forest fires. Jeff Howard (co-writer) and Paul Gerard (creative development director) affirmed that this film is a tribute to the brave men and women who keep us all safe from the threat of fire.

The film also revolves around the idea of second chances and becoming, “better than new”. During the press release, many members of the team working on the film including director Bobs Gannaway and producer Ferrell Barron stressed that this story was meant to illustrate these themes. Many aspects of the movie – including the kind of planes used, the structure of the plot, and even small visual details were created in order to show audiences of all ages that second chances are possible.

When asked whether the movie’s story would be more applicable to children or adults, Gannaway and Barron agreed, “both!” They explained that the movie ties both emotion and humor together by creating a clever story that also illustrates how Dusty learns how to save lives. Not only does the theme apply to every kind of age, but the humor involved does as well: for example, the childlike humor is coupled with older cultural references that adults would enjoy – but I won’t spoil it for you!

The team working on “Plan 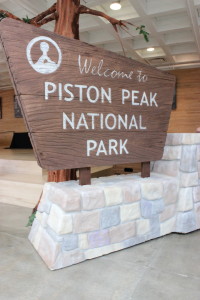 es: Fire & Rescue” also noted how the movie required an incredible amount of research. They wanted to make sure that the movie would be an appropriate honor to true-to-life firefighters.

So they turned to those firefighters themselves and asked them for help in making the movie as accurate as possible. During the Press Day various members of the team showed how they collaborated with firefighters at Cal Fire and aerobatic pilots like Chuck Aaron in order to make the movie as detailed as possible.

Howard and Gerard even discussed how the movie was created by cycling through stages of ideas and research. By pairing their imaginations with the help of real life professionals, they were able to create a tribute to those professionals.

Gannaway and Barron also talked about how accuracy is important in establishing realism. Their goal was to make the audience to forget that the movie involved “talking vehicles” and instead to become truly emotionally involved with Dusty’s story. Accuracy helps in making the movie as real as possible.

This involved, for example, creating a perfect setting. By visiting and combining elements from famous national parks like 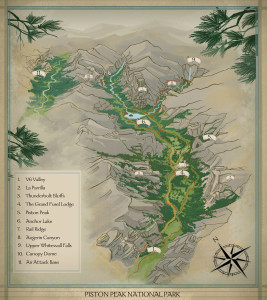 Yellowstone and Yosemite, the team was able to construct Piston Peak National Park, where most of the action of the movie takes place.  Toby Wilson (Art Director) noted how the film is set in a place based on reality, but also has a touch of the uniqueness of the Planes universe. This results in a setting that’s both realistic and imaginative.

Casting helps to establish the film as well – the perfect voice actor brings a character to life! Real life couple Jerry Stiller and Anne Meara, for example, play an elderly couple of RV’s celebrating their 50th anniversary. Gannaway explained how when Meara spoke an “I love you” line for the movie, there wasn’t a dry eye in the room! The right voice actor brings the right emotion to the movie, making it even more real to the audience.

The film combines emotion with humor that people of all ages will enjoy. It is set in a universe that is recognizable, but also unique in that it is built upon imagination. This complex background results in a great movie that all types of people will enjoy.

Overall, the story certainly has a positive message on “second chances”, and is also a wonderful tribute to the brave firefighters who work without recognition every day. At the Press Day director Bobs Gannaway even commented that this film may be one of the only movies concerning forest fires ever created and expressed his wish that this movie would bring awareness to such an important, yet overlooked issue.

Whether you’re looking for a good lesson for your kids, a good laugh for yourself, or a good tribute to bravery, “Planes: Fire & Rescue” is the movie for you! Check it out in theaters on July 18, 2014!

What other unsung heroes should be celebrated in future movies? Do you believe in second chances? Let us know in the comments below!