If you’ve ever driven past the Walt Disney Studios in Burbank before, you’ll notice one building in particular that is very distinctive compared to the others around it. This one has a large Mickey Mouse sorcerer’s hat on it that seems to declare that just like in Fantasia films, this building that dawned that hat holds a lot of heroic Disney magic. 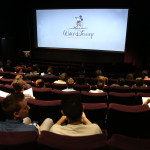 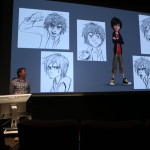 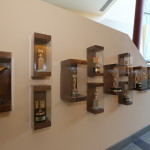 Animation has and always will be the lifeblood of The Walt Disney Company. Starting with Walt and his “Nine Old Men” animators who dressed in suits to the modern-day animator who wear jeans and a t-shirts, the common thread across those generations is the belief that story is king and vivid animation should support it. In other words, story combined with animation are the heroes which is especially in their newest film due out November 7.

A few weeks ago, I had the opportunity to step underneath that sorcerer hat and meet a lot of those animators and their fellow filmmakers at the Walt Disney Animation Studios (WDAS) to see how they would be living up to their history with “Big Hero 6”.

The invite-only press day was filled with all sorts of magical experiences that anyone, Disney fan or not, would love to take part in. From seeing the multiple awards that WDAS received from past films like “Beauty and the Beast” in the lobby to seeing the animation happen right in front of your eyes in the offices above, it was difficult to realize that all this was work. But it very much is. 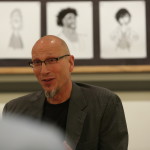 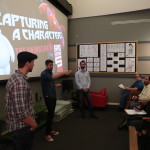 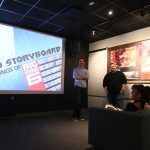 “Story is king because it has to be,” said producer Roy Conli (Tangled) said to start the day. “We’ll work sleepless hours and even push back release dates to get it right.” Although they didn’t have to do that for “Big Hero 6”, the entire 800 person team took nearly a decade to explore the story before animating anything.

“It took 4 to 5 years to develop a good story,” Paul Briggs, head of story for the film told us. His colleague and screenwriter Robert Baird added that “Those years will have its highs and its lows as your ideas will be attacked and you have to be OK with that.” Since everyone is dedicated to telling the best story, everyone must be willing to get constructively criticized and collaborate. Egos are the villains that everyone at Disney Animation wants to get rid of.

Fortunately for us, those villains couldn’t come near the film because of the strong backstory and inspiration for the film itself. “I’ve always been a fan of Marvel comics, so when our friends at Marvel gave us the blessing to use one of theirs, I was floored and ran with it” co-director Don Hall (Tarzan) commented. Even if Disney does own Marvel now, the purpose to use their comic had less to do with attracting a new audience and more to do with using the characters and worlds to tell a new story, getting rid of limits that might have been another villain to fight. 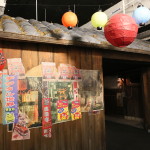 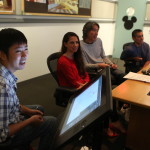 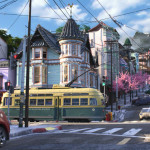 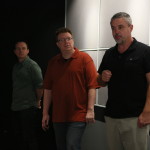 As a result, “Big Hero 6” is very loosely based on the original long-lost Marvel comic, but does take inspiration from it when it came to finally animating once the story was approved. While visiting the environment, effects, and animation departments, we were met with some amazing visuals created by some amazing people who would all harmoniously combine it all to make the story come alive. “Animation’s true purpose is to be fun, to entertain” says head of animation for the film Zach Parrish (Wreck-It Ralph). Michael Kaschalk‘s (Meet the Robinsons) effects department added to that fun by creating a slew of super effects for the super heroes in the film. “Lighting and the other visuals especially in the 7 fight scenes will blow people away like we wanted to,” he said. Production designer Paul Felix and his team (Mulan) gave all the other departments the context they needed to tell their story by creating the setting of the film and the costumes of the characters themselves. “We were told by John Lasseter to create a new world from our real world, so we explored our own world to make a new one.” 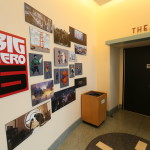 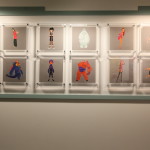 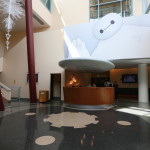 That new world really all came together when production wrapped on the film just a few days ago. Before that and during the press day, I had the privilege of getting an extended preview of the film and I certainly think there are things to be excited for. Following up with a film after “Frozen” was a huge undertaking that everyone at WDAS (and the general public alike) agreed on, but that was never a villain like the egos and inspiration could have been. For them, the real task was to hold true to what they’ve been known to do for over 90 years – tell great stories. “Big Hero 6” and even its animated short “Feast” and their stories will be emotional yet memorable, beautiful and funny (especially the character of Baymax!) – all things that set apart movies from being good to being great.

Because of the talented and humble people who work at the Walt Disney Animation Studios and their dedication to protecting story and supporting it with unparalleled animation, I wouldn’t be surprised if you’d be surprised at the movie magic that’s headed into theaters very soon. The animators aka master storytellers are all the real heroes in this case.

Will you be watching “Big Hero 6” in theaters? Are you happy to see a different story instead of the expected Disney princess film? What are you villainous doubts do you have about upcoming film? Would you want to work at Disney Animation squashing those villains? Share your thoughts in the comments below!