Before Anna and Elsa, The Avengers, Woody and Buzz, and Jack Sparrow, there was Mickey Mouse. Mickey is arguably the most recognized cartoon character in the entire world. Show anybody the outline of the famous mouse and they will recognize him instantaneously. The new “Disney Shorts” featuring Mickey and the gang pay homage to the classic cartoons that started it all for Disney.

By combining new animation and old style art, these new Mickey Mouse shorts will bring back memories and maybe create new ones. Each short runs between 3 1/2 to 4 minutes and tells light-hearted stories using mainly Mickey Mouse, Donald Duck, Goofy, Minnie Mouse and Daisy Duck. Much like that of the old shorts where the same characters are put in different situations in each cartoon.

What stands out the most about these new shorts is the humor that can be enjoyed by today’s generation. The characters featured in the cartoons have been around for decades. It’s a challenge to continually reinvent the same characters and still have it be relevant with the times, but these cartoons have captured the like-ability of these classic Disney characters, but with a modern flare. For example, Mickey Mouse still exhibits his long-beloved charm with a few episodes that showcase the 86-year old romance between Minnie Mouse and himself. Donald Duck is still not understandable when he yells angrily.

The one complaint I have about the characters is on Goofy. Frankly, the animators made him look like a bum 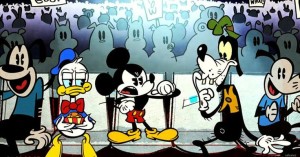 Goofy’s intelligence level seems to have improved as shown in the short “Goofy’s Grandma.” He tricks Mickey into thinking his grandma, who is actually Goofy himself, needs a place to stay and takes full advantage of his mouse friend. This is a different look at the old head-scratching Goofy of old.

In all, the new Mickey Mouse shorts are a chance for the new generation to enjoy these classic characters that were so dear to Walt Disney himself. Let’s not forget Walt’s famous quote: “I only hope we don’t lose sight of one thing – that it was all started by a mouse.” And with these revitalized cartoons, I don’t think we’ll be losing sight any time soon.

These new Mickey Mouse shorts play between shows on Disney Channel, as well as on-demand via  YouTube under the “DisneyShorts” channel and on Disney.com.

What do you think of the new modern twist on these classic cartoons? Do you wish Goofy looked more ‘goofy’ and less bum-y? Why do you think Disney shorts matter to our society? Comment below!