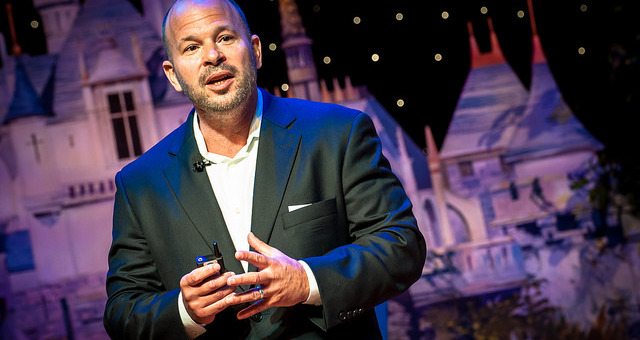 Did you know that there was a time where you couldn’t follow Disneyland on Twitter and Instagram? Or that Disney’s official blogs didn’t exist? Yes, there was that time when social media and blogging wasn’t around, but now that it is, how could it be used in the case of Disney?

Thomas Smith, social media director for Walt Disney Parks and Resorts, seems to have found the formula to make Twitter, Facebook, and Instagram the most magical social media platforms on earth. Since taking up the newly created position in 2009, he and his worldwide team have made a substantial impact for Disney on the social web. Why? Because they feel it will add to the magic.

In more specific terms, he wants to make spaces where “people can connect to find happiness and knowledge” – a typical Disney goal! According to Smith, accomplishing this task takes 3 parts: people, storytelling, and experiences.

People connect with people. Not brands or logos.

As leader of the first and only Disney Parks’ public blog and social media accounts, Smith thought that it was important to include all 70+ writers’ names on every post for readers to get to know them.  He gives the bloggers freedom to get more curious in order to drive them to get the content they need. The social media team also uses a large amount of images and videos that shine a light on the bloggers and their personalities.

Disney Parks’ use of social platforms like Facebook, Twitter, Instagram, and YouTube also aim to connect and engage audiences. With nearly 1 million+ people subscribing or following along, it shows the intense interest there is in connecting Disney with people in their everyday lives.

Our bread and butter, by far, is behind-the-scenes. We have all these geniuses who are working behind the curtain.

The cast members that create content for the blog and social media platforms play a huge role in making our online presence like “a daily show.” Planning and scheduling each bloggers’ seven to eight blog and Twitter posts every day occurs months in advance. Smith emphasized that only 10 percent of their work gets seen by the public, but 90 percent makes up content planning, gathering, production, publishing, syndication, and analytics – thing’s that don’t get seen.

Smith said that paying attention to searches showed his team when and what topics people are anticipating. In July, the search engine optimization team found out that people were already looking for Christmas-related events. In the same way, recurring postings like “Wildlife Wednesday” and “Throwback Thursday” are created to get people to expect content and to keep engaging.

Everything we say will not be remembered, but how we make you feel will last.

The entirety of The Walt Disney Company has revolved around the ability to make experiences feel special, no matter how big or small. From getting a simple Twitter question answered to being able to create free, one-of-a-kind, money-can’t-buy experiences (that they call meet-ups) it’s all about making a magical impression on people in hopes they stick around for more. “Twitter and Facebook may not be around in five years, but we will be,” Smith said and you can bet that even more Disney magic is still yet to come through social media.

Smith tells bloggers they should create stories “so good they’re contagious.” Will you be taking his advice in your own blogging and social media sharing? Were you surprised with any of his strategies or what happens behind-the-scenes of Disney social media? Do you follow any of Disney’s social media accounts? Let us know in the comments!