“Once Upon a Time” gets Frozen! 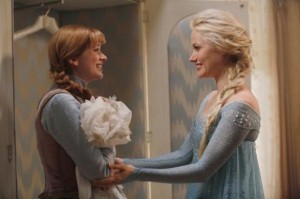 The new season premiered last night on ABC and dropped the audience right in the middle of Arendelle, setting up new battles for Emma, Regina, and the rest of the cast to fight – that is, if they don’t end up fighting each other first.

Last season’s finale left us with burning questions: what is Elsa (Georgina Haig) planning to do in Storybrooke? Where are Anna (Elizabeth Lail) and Kristoff (Scott Michael Forster)? How will Regina and Robin Hood deal with Marian’s return? Are Hook and Emma together? How are Belle and Rumplestiltskin handling marriage; and how is he hiding the truth about the dagger from her?

The season premiere actually gave us a glimpse into the answers to these questions and even more. We saw a little bit of Belle’s and Rumple’s married life (with a little classic ball room scene) and the progression (or lack of progression?) of Hook and Emma’s relationship. We saw Regina and Robin Hood dealing with the complications of Marian’s return. And, of course, we got to know a little more about Elsa, Anna, and Kristoff.

You all know that we don’t like to spoil anything for you all, so click below to read a little synopsis and commentary on last night’s season premiere if you really want to know!

The episode opens with Anna and Elsa looking for the truth about their parents. It brings up issues that the original movie dealt with, such as Elsa struggling with feeling like a monster and Anna trying to convince her otherwise. The season also opens with new problems such as what Anna and Elsa’s parents were doing where they died, how Anna will cope as she travels to Misthaven (The Enchanted Forest) and, of course, how this will all affect Anna and Kristoff’s wedding! It’s a deep dive into Arendelle, and this season opens with an extensive look into the characters’ lives unseen in the animated feature. 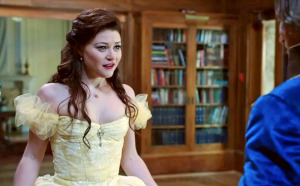 We also see a lot of the original Storybrooke characters as they deal with a whole new set of problems. Emma and Hook seem to be taking things slow with their relationship, but Belle and Rumplestiltskin take marriage head on by moving into a new house and, most surprisingly, with Rumple switching Belle’s fake dagger with the real one. Regina, however, continues to struggle in her relationship with Robin Hood and Marian.

One of the most interesting and perhaps frustrating aspects of the new season is the way it challenges Regina to choose between good and evil. Will she use her powers to get rid of Marian, or continue to use the light within her to welcome her to Storybrooke? The episode hinted at both, and ultimately the end of the episode left Regina ambiguously seeking out the author of Henry’s story book. Only time will tell whether or not she’ll continue to use the light in her or return to dark magic.

The episode ends with a chilling claim about villains and happy endings. Only the rest of the season will tell how these two are related to each other.

This new season of OUAT transitions into the world of Arendelle with a lot of new questions and many references to “Frozen” (who else caught that Emma/Regina parallel to Anna/Elsa?!). Who knows where the show will take Elsa and Anna’s story? How will the original cast deal with these new characters? Tune in Sundays this Fall at 8|7c to see how the rest of the season plays out!

Do you think Frozen makes a good addition to the Once Upon a Time story line? What other stories would you like to see included on the show? Let us know in the comments!