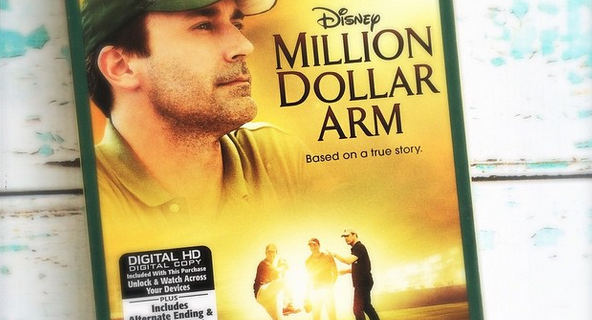 From India to our TVs, Disney’s latest sports film “Million Dollar Arm” is now out for purchase in stores for our viewing pleasure. To read our review on this outstanding film, click HERE. Other than the movie itself, the features that come with its home video iteration proved to be very interactive and engaging.

The bonus features consist of 6 options:

Training camp: This feature depicts Suraj Sharma’s (Rinku) and Madhur Mittal’s (Dinesh) training to be pitchers, along with their personal thoughts about the whole process. It also shows the training both of these actors had to do not just for pitching, but to look like athletes throughout the movie.

Their Story: Since this story is based on a true one, it will also revolve around true people, which is what this feature is about. ‘Their Story’ is a take on the thoughts of J.B. Bernstein, Rinku Singh, and Dinesh Patel on the ‘Million Dollar Arm’ initiative.

Million Dollar Music by A.R. Rahman: The feature goes in-depth into the making of each soundtrack with music producer A.R. Rahman. He explains the inspirations and thought processes of each track. Interestingly enough, Rahman has never had experience with producing scores for sports movies.

The other three options that are included with the bonus features also include the standard deleted scenes, alternate endings, and outtakes aka bloopers! Of course, these features are amazing perks in support of the film’s great story of winning out against all odds. The odds of purchasing this Blu-ray for that story and its supporting bonus features are in your favor! So, why wait? Play ball…or buy this Blu-ray!

DisneyExaminer has its own bonus features to this story as we’re giving away a “Million Dollar Arm” Blu-ray combo pack to one of you, our grandstand fans!

You can enter by using the widget below.

Did you see the film while it was in theaters? Will you be purchasing the Blu-ray? What bonus features are you looking forward to seeing? Comment below!