“What’s this? What IS this?” A Danny Elfman concert, of course.

Only this past Sunday, I had the pleasure of attending Danny Elfman’s Music From the Films of Tim Burton concert at the Honda Center in Anaheim, California. What artistry I heard that evening! The famed Hollywood Symphony Orchestra was conducted by maestro John Mauceri who lead the night filled with the sounds of the duo’s history of making film and music together.

The set list followed a chronological order, starting with Elfman’s first big break with Tim Pee Wee’s Big Adventure and on to Beetlejuice, Batman, and Edward Scissorhands. The night rounded out with the well-known favorites from the films that Burton did for Disney including Frankenweenie and Alice In Wonderland (which is ultimately why we’re there covering it)! 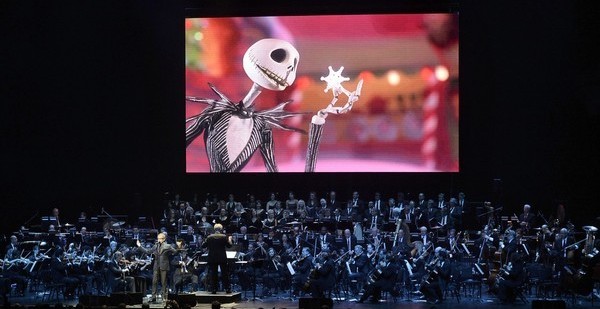 But the true highlight of the evening was when Danny Elfman himself took the stage for the crowning segment: The Nightmare Before Christmas. The applause was deafening as the singing voice of Jack Skellington came forward to perform his own songs.

“The Nightmare Before Christmas”, based off a poem by Tim Burton, was not the first time Burton and Elfman had worked together and most certainly would not be the last. It was, however, the first time Elfman’s voice had graced the silver screen. And what a voice, too. Elfman, who has previously been lead singer of the rock band Oingo Boingo, really gave a life to the character of Jack Skellington – a character Elfman has said he felt that he had a lot in common with Jack. That life is not lost after all these years as Elfman’s dynamic performances as the Pumpkin King clearly show. From the moment Mr. Elfman opened his mouth to sing ‘Jack’s Lament’, it all came back with passion and fervor. 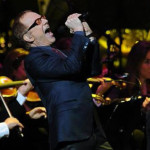 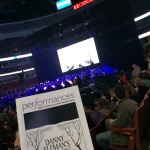 The dynamics only increased when Elfman launched into his second song ‘What’s This?’. Again, you could hear the wonder in Jack’s voice through Elfman’s characterization of the skeleton grinning at the Christmas wonders surrounding him. That song was quickly followed by the film’s favorites like ‘Jack’s Obsession’, ‘This Is Halloween’.

In all, the experience was wonderful and listening to the music without watching the films they come from made me only appreciate the music all the more. Elfman may be the voice of the Pumpkin King and his ‘Nightmare Before Christmas’, but he has also given us a wonderful gift: timeless music to enjoy any time of the year! And for that, we’ll be eternally grateful.

Special thanks to Honda Center and Mr. Elfman’s public relations teams for allowing us to take part in the concert!

Do you appreciate the music of Tim Burton’s films? What makes that music so memorable? What other projects do you know Mr. Elfman for? Tell us and comment below!