The attendees of the 7 p.m. showing of Big Hero 6 at the El Capitan Theatre on the film’s release date on November 7 were surprised by an appearance by the band Fall Out Boy. They wrote a song titled “Immortals” for the movie’s soundtrack. Lead vocalist Patrick Stump, bassist Pete Wentz and guitarist Joe Trohman stepped on stage to the sounds of cheering to briefly introduce the movie to the audience.

After the band’s introduction, they retreated backstage where I met up with them. It was a nerve-racking experience standing next to my favorite band, but their warm, welcoming nature was apparent from the start. The whole time felt less like an interview and more like a hang out.

Fall Out Boy was approached by Disney to write a song for Big Hero 6 and were shown raw storyboards when they met with the filmmakers.

“We had a dialogue back and forth of what the overall story was going to be, what the theme was going to be, and would it be something we’d be interested in writing for. It was really synonymous with what we feel the Fall Out Boy universe is, so it kind of went from there. Organic,” Wentz said.

Trohman said he was surprised by how creatively nurturing everyone was. “When we were working together, there weren’t like people breathing down our necks.” The biggest challenge in writing “Immortals” was creating a song that stood out enough but didn’t overpower the scene. They wanted to write a song that they could take seriously, but also one that would make sense to a 6-year-old. “That kind of point of view forced us in a lot of ways to challenge us to suspend the ‘this is how we write’ kind of thing,” Stump said. “What works for Fall Out Boy doesn’t necessarily work for the scene of the film.” 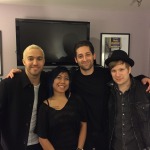 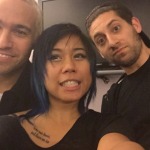 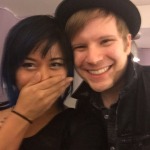 When the band was first formed, Wentz wrote most of the lyrics while Stump did most of the composing. However, the chemistry of Fall Out Boy changed when the band returned last year from a hiatus. “I think we all collaborate differently now. The cool thing with 2.0 Fall Out Boy is everyone is part of the engine that’s running now. And I think that like the engine runs better now because of it,” Wentz said.

Wentz brought along his 6-year-old son Bronx to the Big Hero 6 premiere. Bronx was familiar with the characters because he and his father have read some of the Big Hero 6 Marvel comics.

Bronx was sitting behind Stump during the premiere and kept spoiling the movie. Throughout the film, the boy would exclaim, “Is this the thing that happens now?!”

Stump laughed and responded with, “Bronx, there’s other people here.”

When I asked which character they identified with, Stump and Trohman both chose Hiro. Stump claimed to be nerdy and said he could relate to Hiro’s “mad scientist” personality. There were a few scenes in the movie where Hiro sometimes went a little too far in his “mad scientist thing,” and Stump felt that he was the same way.

Trohman claimed that his wife told him that he was a bad listener and he always does what he wants to do, which he also saw in Hiro during a fair amount of the movie.

Wentz said he related to Baymax because he likes to take care of people. “But in actuality, I’m probably like Fred or something. He’s just like… there,” he joked.

Big Hero 6 is now out in theaters. Be sure to read our spoiler-free review before you watch and keep an ear out for Fall Out Boy’s “Immortals” during the movie!

Thank you so much to Fall Out Boy, as well as Disney and the El Capitan Theatre for giving me this opportunity to interview my favorite band.

Is Fall Out Boy one of your favorite bands? Do your think their song “Immortals” was fitting for the movie? Comment and tell us below!