The Hunchback of Notre Dame premiered as a musical in Germany in 1999 and then fell into silence. But finally after 15 long years, the bells have begun ringing again as the doors to Notre Dame cathedral swing open to a new audiences for a limited run that has begun at the La Jolla Playhouse in San Diego! It’s not an exact replica of Disney’s film version, but if you’re looking for a complex, alternate look at the story, you have to watch this musical production that brings the tale to an epic, darker level.

As soon as you walk into the theater, you’ll notice the beautiful set design which will take you back to the Paris of the 1400s where the story takes place. The set shifts from the interior of Notre Dame, to Quasimodo’s bell tower, to the town square, and beyond. It all brings you into the world of the characters through excellent craftsmanship and astonishing effects (they’re even able to accomplish live slow motion)! The transition from one set to another supports the exciting, rapid pace of the story which really flies by because of the harmony between two other things that make this production like no other. 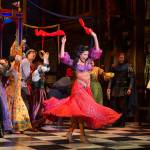 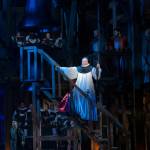 One aspect that does transition well from screen to stage is the music. The production’s music, adapted from the original award-winning film soundtrack, is revived by an excellent live band and choir, plus the actors’ beautiful voices. Some songs are modified and there are many new ones that don’t appear in the movie, but all fit well within the scope of the story. Original songwriter and Disney Legend Alan Menken (Beauty and the Beast, Aladdin, Pocahontas) returned to write the new melodies and partnered with the legendary lyricist Stephen Schwartz (The Prince of Egypt, Wicked) for the right words.

While the plot of the production changes from the film in major ways, it makes up for them with the addition of new plot points which make the story much more intricate and, in my opinion, enjoyable to watch because you won’t be expecting them. However, the production still brings up the somewhat adult themes from the film. As we all know, Victor Hugo’s story is quite dark and the stage adaptation is even darker than Disney’s movie, but perhaps that’s because it’s all playing out in front of you in real life!

Of course it’s ultimately the actors who are able to bring the show to its full potential. The characters were all well a seasoned cast that includes Michael Arden who takes the lead as Quasimodo and does so by excellently portraying both Quasimodo’s outer appearance and inner turmoil. Patrick Page (Frollo), Ciara Renee (Esmeralda), Andrew Samonsky (Phoebus) and the rest of the ensemble give powerful performances that pay tribute to their on-screen animated characters while adding their own humanity to it all. In fact, perhaps the greatest element to watch was the dynamic between Quasimodo and Frollo. Certain changes in the story shed new light on the relationship between these two (which we won’t give away) and make the production much more complex than the movie and will have audiences truly questioning “what makes the monster and what makes the man?”

At first, I was looking forward to seeing an exact replica of the movie like how most inspired Broadway musicals are, but when I saw how it was all modified, I was not disappointed – on the contrary, I felt that the changes Disney Theatrical Productions made added a value that made me feel that my money was well spent. Still, the production does a wonderful job of honoring its roots with beautiful renditions of the original songs and dark story. To a Disney purist, these radical changes might be unwelcome, but if you’re willing to see a Disney classic in a new light, you won’t be disappointed and I think that’s what any musical adaptation should be able to do.

The Hunchback of Notre Dame will be at the La Jolla Playhouse from October 26 to December 14, 2014 before making its way across the country to the Paper Mill Playhouse in New Jersey beginning March 4, 2015. Depending on its success during this limited run, the production may make it to Broadway in the near future.

Our special thanks to the La Jolla Playhouse for allowing us to review the production!

Will you be heading to San Diego to visit Quasimodo and his friends? Did you like the original Disney movie or did it scare you? Will it scare you away from seeing the musical or draw you into the theater? Comment below and tell us!