Yesterday, we had the privilege to be invited to the launch event for Kingdom Hearts HD 2.5 ReMIX that was held at the Walt Disney Studios lot in Burbank, California. This event was hosted by game developers at Square-Enix and Disney as way to thank the fans of Kingdom Hearts for their support throughout their franchise’s existence.

There were many things for fans of the series to enjoy before the actual event started! First, Square-Enix set an area designated for selling merchandise from the series. Fans were able to purchase a myriad of items such as wall scrolls, action figures, Keyblade key chains, and copies of Kingdom Hearts HD 2.5 ReMIX. People who attended the event were lucky because they were able to purchase the game a day before it was publicly released!

Next, people at the event had an opportunity to mingle with royalty. King Mickey graced attendees with his presence and allowed his loyal subjects to interact and take pictures with him. I have to admit I was a bit starstruck when I first met his highness. I noticed that he sensed that I that I was nervous but the king made sure that I felt comfortable and he let me know that he was just a normal person just like the rest of us. Once my nerves settled, I held up my Keyblade keychain and was ready to snap a photo with the king and the rest of my colleagues. The last item that was on the agenda before the event was a cool photo opportunity with a background from certain worlds of the game such as the Keyblade Graveyard and Twilight Town. 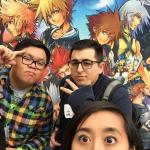 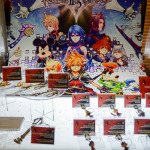 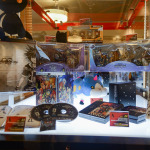 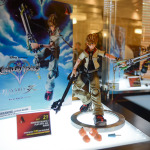 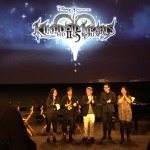 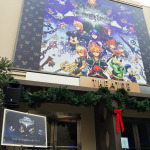 After all of this fun, it was time for the main event! Things kicked off with people from Disney and Square-Enix were thanking the fans for coming and supporting them with vigor throughout the years. They showed us videos of testimonials from Kingdom Hearts fans from around the world. These fans detailed the significance that the game has had on their lives. It was very moving to hear these people speak about their love for the game. I really had no idea that this game had such substantial impact on people!

After the testimonials were played, we were shown a video that featured the game’s composer, Yoko Shimomura. This video discussed this impact that Kingdom Hearts had on her life. We were then treated to a live concert of some of the game’s music. Performed by famed video game pianist Livan, we listened to many songs from the game. The highlight of the 6 song set was when they played the highly recognizable “Dearly Beloved.” The audience was in for a treat because Shimomura herself made a surprise appearance and performed it as a duet.

Once the final note was played, it was time for a Q & A panel with some of the developers from the game. The executive producer Shinji Hashimoto and director Tetsuya Nomura (who was also a surprise guest) came to the event so that they could take some pressing questions about the franchise. Nomura answered many questions such as his inspirations for the game and his favorite scenes from Kingdom Hearts HD 2.5 ReMIX. He spoke through a translator and gave his answers to the audience. If you want to learn these answers and more from Nomura, then keep an eye on our site because we have a special surprise for you!

As the event came to a close, Square-Enix had one more surprise in store – an exclusive, very small sneak peek of Kingdom Hearts 3! The end of the teaser told us that we should expect to hear more about this game in 2015 and perfectly ended the night as magically as it possibly could. If anything though it’s now 10 years old. one can be confident that the Kingdom Hearts franchise is alive and well and, according to the game’s main character, has that “light can never go out.”

Our very special thanks to Square-Enix and Disney for inviting us to their special event!

Will you be playing HD 2.5 ReMIX or will you be waiting for 3? What do you think the future holds for the Kingdom Hearts franchise? Comment below!