‘There’s something about the woods…” said actress Tracey Ullman.

That ‘something’ were positive things that she and the rest of her fellow cast members and filmmakers thought when deciding to take part in Disney’s upcoming live-action musical feature film. They said as much at an exclusive press junket that we had the opportunity to take part in Beverly Hills where they all expounded on their own reasons, that although different, reflect a common “root” through them all.

Tracy Ullman and Christine Baranski, who portray the roles of Jack (and the beanstalk’s) mother and Cinderella’s Stepmother, respectively. Baranski, a musical film veteran herself, was thrilled to work with director Rob Marshall once again, calling it a “great reunion.” Tracey Ullman was introduced to Into The 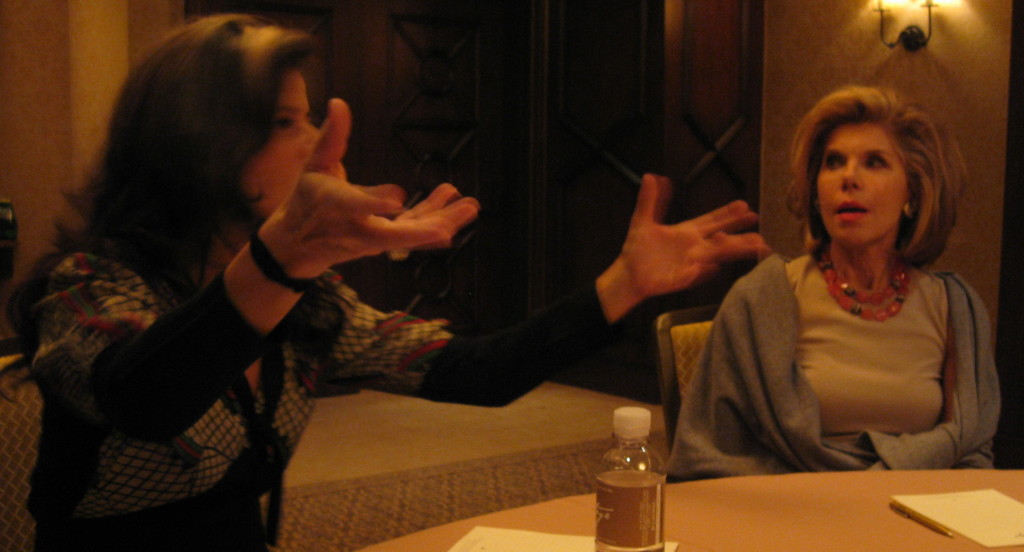 Woods by her son and has loved it ever since. As their characters, the two women were both mothers, something Tracey herself stated was a powerful thing when portraying Jack’s mother. Tracey even shared that she was protecting her son from giant woman yelling so much that she nearly passed out in the effort to keep her boy safe from “raging giantess” kinds of women. When it came down to it, the two actresses agreed that their characters symbolized real-life practicality and the opportunism of desperation saying that it’s “the darkness of Grimm’s fairytales come back to the fore.”

Costume designer Colleen Atwood, fresh off the set of Alice in Wonderland: Through The Looking Glass, also shared her insight on creating the woodsy costumes the cast wore. She took a lot of inspiration from the setting the characters would be playing in. For example, she designed the costume of the Witch to be nearly the same as the tree she first pops out of, as well as accounted for the platform shoes Meryl Streep would have to wear on the bumpy set after her transformation into a beautiful woman. Atwood said that she envisioned the Witch seeing “everything as more of what she was, but in a refined, satin gown kind of way.” Other specifics Atwood oversaw was ensuring that all costumes allowed freedom of movement like Cinderella’s dress for which she wanted to be “like a butterfly, she came and went.” She also worked with special effects to create unique items that needed some imagination and tech like Johnny Depp’s Wolf costume.

For Rob Marshall, the film’s director, the entirety of the story is, well, the story. Having stated that his passion is having live theater tell that story (having directed the award-winning Chicago film), Marshall felt it was important to have the film be very solid and real to that end. “Granny’s tree is a real 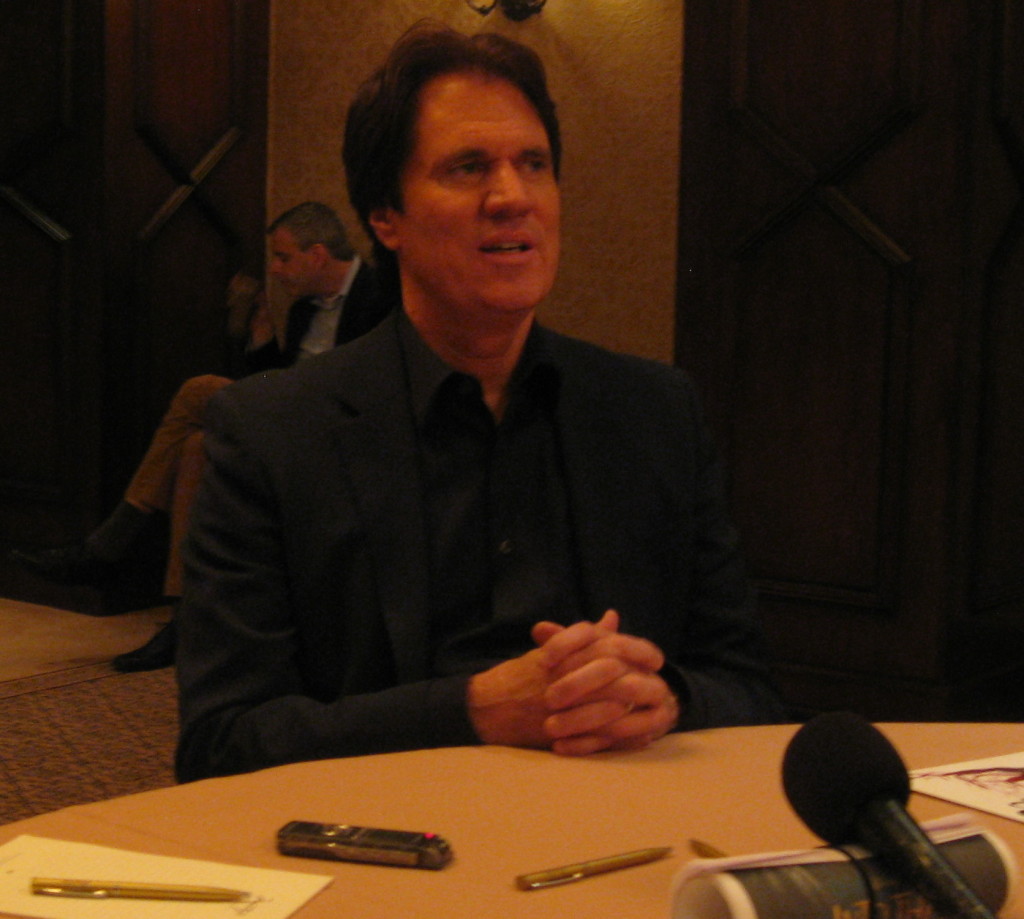 tree. The tree Jack is climbing in ‘Giants in The Sky’ is a real tree.” But aside from the trees, Marshall created miniature for the scenes with the giantess and made sure that everything was very real so that the audience could connect to the characters and their struggles. Yet beyond the set design, Marshall did say that there had to be allowances for the change from stage to screen, something he credits music supervisor from the original musical Stephen Sondheim and creator James Lapine with helping to do, as they came on and wrote the screenplay. “It was funny, they [Sondheim and Lapine] were much more flexible than I had thought they would be, even more so than I was, ironically enough.” Overall, he said that he tried to make the film seem like it was all unfolding naturally, rather than guided by his hand. “If there’s too much of me in there… then you’re taken out of the film,” and therefore out of the magic of a movie.

Emily Blunt, Anna Kendrick and James Corden, who portrayed the roles of the Baker’s Wife, Cinderella, and the Baker, respectively also spoke about going through their own woods as actors saying how they tried to find their own paths, whether it be soon becoming a talk show host in Corden’s instance or making the decision to go to New York to pursue music at a young age, as Kendrick did. Even within filming the movie there was some searching as Blunt states. She was chosen by director Rob Marshall after he found out she could sing, as well as being a talented actress who could convey the emotions of the Baker’s Wife. But apart from singing, the real question was posed – was it difficult to find the character, with either an abundance of material to work with (in the case of Cinderella) or the lack thereof (with the Baker family)? The response from each of the actors summed up the entire junket and the theme of finding the woods. Kendrick gladly responded for the group saying “we were thinking about the characters as people. There was never a sense that we had to honor anything other Sondheim. It was never the pressure of Cinderella, it was the pressure of Stephen Sondheim.” 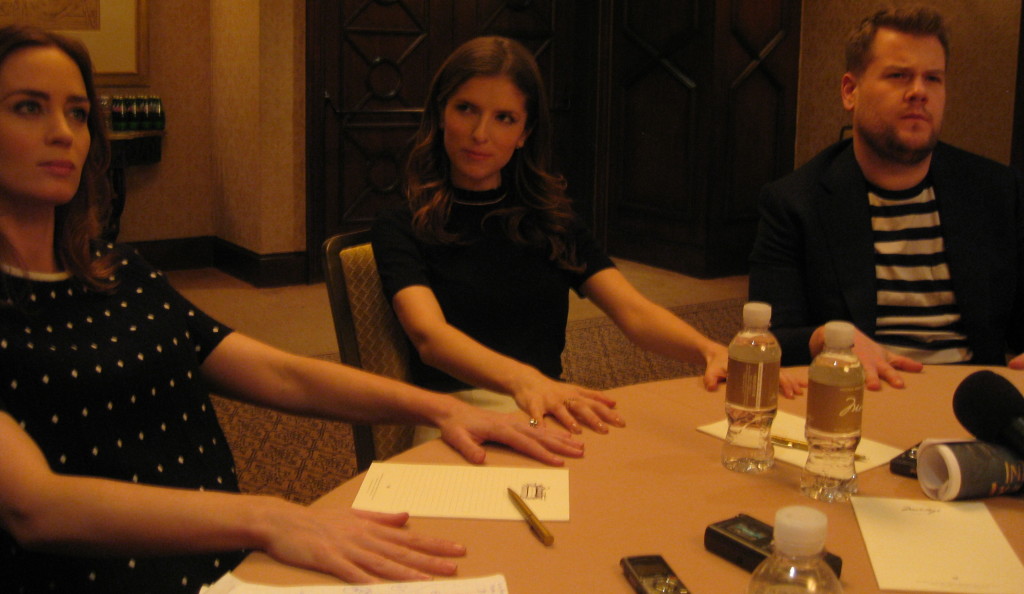 The real root of “Into the Woods” is the music. From the original Broadway production to this film, the music was what really captured the attention of the stars and filmmakers to do the film. The genius of having the same music director only highlighted everything else everyone previously talked about. Having Sondheim a part of this only highlighted the magic of storytelling solely through prose and musical note.

Clearly, Disney took great care to let everyone contribute to telling the story of these woods because they knew they had something special in their care. The story of “Into the Woods” is only exemplified by the cast, costumers, director, and musicians who each brought the woods to life allowing us to have one more great movie to close out 2014 on a “high note” to say the least.

Be sure to read our SPOILER-FREE review of the film posting tomorrow!

What do you think of the care that went into creating “Into the Woods”? Do you appreciate Disney doing adaptations of past popular entertainment products? Share your thoughts in the comments below.