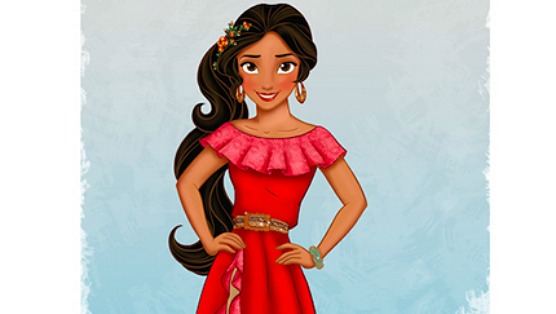 Diversity for Disney has always been a hot-button issue, but the Company has made strides in featuring more ethic and cultural groups that make up its storytelling lineup. Earlier this week, Disney shared the royal news that a new Disney Princess would be introduced to the world.

Her name is Elena and she will be getting her own show on Disney’s cable channel for young viewers Disney Junior.

Elena is described as “a confident and compassionate teenager in an enchanted fairytale kingdom inspired by diverse Latin cultures and folklore.” She will be voiced by Aimee Carrero from ABC Family’s Young & Hungry. We’ll get to first meet Elena in an upcoming episode of Sophia the First that’s currently in production and will air in 2016.

After that, her show will also debut in 2016 on the network. Her show will still be like other Disney Junior shows that are aimed at child development for kids who watch. Disney provided the backstory of the show which we’ve included below –

Princess Elena’s journey began long ago when her parents and kingdom were taken from her by the evil sorceress, Shuriki. Elena bravely faced the sorceress to protect her little sister, Princess Isabel, and grandparents but in the process, her magical amulet pulled her inside its enchanted jewel, saving her life but imprisoning her at the same time. Decades later, Princess Sofia of Enchancia discovers the truth about the amulet she has worn since joining her royal family and sets out to restore Elena to her human form and help her return to the kingdom of Avalor.

While Elena is the rightful heir to the throne, she is only age 16 so she will rule Avalor with the help of a Grand Council comprised of her Grandfather Tito, Grandmother Cici and Royal Advisor, Duke Esteban.

With some magical friends by her side – Mateo, a wizard-in-training, and Skylar, a magical flying creature – Princess Elena’s further adventures will lead her to understand that her new role requires thoughtfulness, resilience and compassion, the traits of all truly great leaders.

This spinoff show comes at a time where Disney’s television atmosphere is rapidly changing. With the many ethnic family sitcoms on ABC like “Black-ish”, the highly anticipated “Fresh Off The Boat” series, and now Princess Elena on Disney Junior, Disney has clearly not just made a genius marketing decision, but one that’ll grow the love people have for the brand no matter what ethnicity you are.

Are you excited to meet Princess Elena? Are you happy to see Disney branching out to include other cultures in their entertainment products? Share your thoughts in the comments!