When it comes to making Disney magic, the Happiest Company on Earth has a way of using the power of creativity and storytelling to share magic with the world. From Imagineers to filmmakers and animators, we have many people to thank for spreading that magic, including Disney’s Yellow Shoes Creative Group – the in-house advertising agency for the Walt Disney Company.

The team at Yellow Shoes is made up of artists, writers, and designers who create award-winning work for Disney Destinations including Disney Parks, Adventures by Disney, Disney Vacation Club, Disney Cruise Line, and Aulani.

For years, they’ve produced graphics, advertisements, promotional campaigns, and more that have made people want to connect with the company. They’ve even taken home awards for their viral uses of Disney brand elements. Take a look at some of the creative team’s designs and projects.

Logos created for Disney’s Aulani Resort and Spa in Hawaii 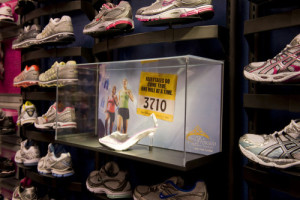 Glass slipper running shoe at Lady Foot Locker to promote the Disney Princess Half Marathon. Based on a concept, “finish before midnight.” 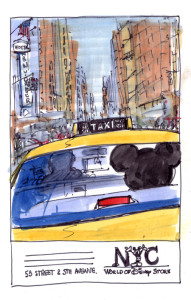 Ad for World of Disney Store in New York City 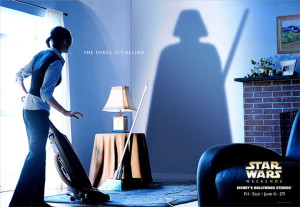 Disney’s Yellow Shoes have also created various videos to promote events. To celebrate a Star Wars event at Walt Disney World, creatives made the fun and tasty video ad below. “This was one of those crazy ideas that we joked about doing that ended up a real thing,” said Creative Director at Disney’s Yellow Shoes Will Gay.

The team didn’t stop there though! Just recently, they created the popular video ad for Frozen Fun at Disney California Adventure Park which may have been playing on your TV screen for a few weeks.

It’s awesome to see the amount of creativity and imagination this group has to share to the world. It’s one thing to already love Disney Parks and Resorts, but it’s another thing to create ways to love them even more. It’s in that spirit that Disney’s Yellow Shoes Creative Group exists and all the more why we can’t wait to see what they come up with next!

Which Disney Yellow Shoes piece did you like best? Do you believe that Disney’s storytelling and creativity helps spread magic even with its ads? Let us know in the comments!