Grim Fandango was first released for PC in 1998 alongside many landmark games like Banjo-Kazooie, Metal Gear Solid, Half-Life, and The Legend of Zelda: Ocarina of Time. While Grim Fandango was not a commercial success, it did develop a cult following.

The game was created by legendary video game designer Tim Schafer while he worked for LucasArts. Ultimately, Schafer left LucasArts to create Double Fine Productions and unfortunately, when Disney acquired Lucasfilm, they decided to shut LucasArts down. Luckily, Disney, Sony, and Schafer had an interest in remastering this game for modern systems so that a new generation of gamers can have the chance to experience this game.

In Grim Fandango, you play as Manuel “Manny” Calavera, a travel agent for the Department of Death. It is Manny’s job to provide travel packages for recently deceased people who are traveling into the final stage in the afterlife. The quality of your travel package is based on your behavior while living. The better person you were, the better package you receive.

But Manny notices that something was wrong with the system because deserving people are not getting packages they should have qualified for. To make matters worse, one of Manny’s clients, Mercedes “Meche” Colomar, goes missing after finding out that she did not qualify for the best travel package, even though she deserved it. Manny decides that it is his job to right these wrongs and to find Meche to give her the correct travel package before it is too late. 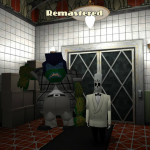 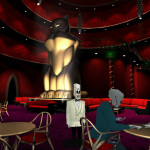 Double Fine updated many aspects of the game in the new remake, including improved character models and control scheme. They also added a fun new feature that allows you to switch the graphics from the original to the remastered with a push of a button. You can instantly compare the graphics of the original game and see how much they improved the character models and lighting systems.

The controls of the game have improved over the original. If you are feeling adventurous and a little crazy you could attempt to play the game with original “tank controls,” meaning that when you push up on your controller, your character will move forward in the direction he or she is facing regardless of camera position. Be thankful that Double Fine created a new control scheme that is based on the camera’s position, like it is in modern games, because the original control scheme is difficult to work with.

Additionally, if you chose to play this game on the Playstation Vita you could also play this game like a “point and click” adventure game using the Vita’s touch screen, which is very neat addition. 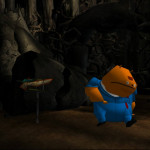 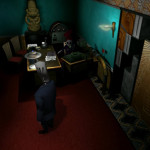 One of the most compelling aspects of this game is that a majority of the characters in this game are Hispanic. I feel that Hispanics are underrepresented as characters in video games, so it was nice to see multiple Hispanic characters (even though they were skeletons) who were not portrayed as walking stereotypes.

In addition to its strong story, there are many memorable characters in this game. The highlight of this game is when you get to converse with the other characters and listen to the nutty things that they say. Perhaps the character that made the biggest impression on me was Glottis, Manny’s best friend. He is a perfect foil for Manny, who is a sly, cunning, and smooth person. Glottis, on the other hand, is a loud bumbling oaf who has a kind heart. Almost every interaction with Glottis was humorous and noteworthy.

This game takes advantage of Sony’s cross-buy and cross-save program. This means that when you buy this game you will be able to play both the Playstation 4 and Playstation Vita versions for one single price. Additionally, you can transfer your saved data between systems and continue playing on whatever system you please.

Unfortunately, I had some issues with the cross-save feature. When I played this game on my Vita, I was easily able to transfer my data from Vita to PS4. Sadly, when I tried to transfer my data from the PS4 to Vita, my game would just crash. I reached out to Sony to help fix the problem but their solutions proved to be ineffective. However, I figured out that you could use the remote play feature of the Vita to play the game through the PS4, but you lose the ability to use the Vita-specific touch controls.

Throughout my playthrough of the game I noticed other glitches such as characters holding items in a way they were not supposed to, disappearing character models, and sound glitches. These glitches are not deal breakers but they are very annoying and can detract from the overall experience. These issues can be fixed if Double Fine decides to address these problems via a patch.

Grim Fandango is a wonderful game but it is not for everyone. Throughout the game you are required to solve extremely difficult puzzles with very minimal guidance. This may prove to be a deterrent for less experienced and younger gamers. In addition, this game does contain content that may not be suitable for a younger audience. If you are considering purchasing this game for a child then check the ESRB rating and content descriptors for this game to see that if your child can handle it. Nevertheless, if you are a fan of adventure games or a student of video game history then you have to check this game out because it is a hallmark for the genre and can’t be missed.

What do you think of the game? Did you rip your hair out during some of the puzzles? What is your favorite moment? Favorite character? Let us know in the comments below!