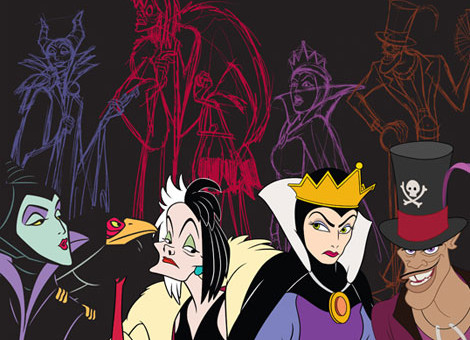 You love to hate them. They are cruel, conniving, dangerous, and just bad to the bone. Even though they are technically the enemy of every lovable Disney protagonist that we root for, one thing can’t be denied: these villains know how to dress to impress.

Here are the most fashionable Disney villains that should be ruling the Fashion World.

The Queen of Hearts isn’t a person that we would associate with love. The only thing that we do love about this character is her sense of style. Not everyone can pull off wearing yellow, black, red, and gold all at the same time but the Queen of Hearts does make it work. Can you say, “Off with their heads and on to the runway!’”

It’s got to be the hair. Though Hades’ toga is very simple and grey, the thing that makes his style so memorable is his fiery locks. The fact that he can change from his beautiful blue flame to his raging yellow fire makes him one of the best fashion forward villains. This Underworld Greek god’s picture will never be made into stars in the heavens but he will go down in history as Disney’s brightest flame-bearing villain there ever was.

We can all agree that Mother Gothel is one strict parent that you don’t want to disobey. Beside her obsessiveness over Rapunzel’s hair that gives her youth, one thing is for sure: Mother Gothel knows how to dress. Her Renaissance red gown is accented perfectly with the golden trim on her belt and collar. Along with her raven curly hair this look just sings, “Mother knows best!”

Talk about extreme makeover. The Evil Queen from Snow White is a true master of disguise. Though she changes into a creepy, ugly witch (which she actually is) she was a beautiful, arrogant, cruel, and vain queen. From her purple royal garbs to her golden crown she was dressed to rule a kingdom. But like every story in fashion she wanted to be the best of them all which led to her downfall (no pun intended).

Let’s take things down to the South and see how a Louisiana witch doctor dresses in his Mardi Gras town. Dr. Facilier aka Shadow Man shows that a top hat is the cherry on top to making a villain look debonair! This conniving trickster shows that a crop top can also be worn by the male gender. Not only will you be in a trance by his voodoo powers but his outfit will also leave your head spinning.

Every woman needs that little black dress to wear once in a while to a night out on the town. Same thing goes for Ursula when she tries to take over the sea. This sea witch’s style shows how simplicity is key. Her bodacious bod, six tentacles, white hair, and lavender skin show that anything can always look good in black.

In fashion one must not forget that accessories are an essential part in making a perfect outfit. Two things that Jafar uses that really take his outfit to the next level are his headpiece and serpent staff. Iago is also a nice touch to Jafar’s ensemble when he is perched on his shoulder. His scheming to become Sultan in the hot, desert, Arabian city Agrabah doesn’t stop this villain from looking too cool for school.

There’s a term used in the fashion world called avant-garde. Famous pop stars like Lady Gaga and Katy Perry have become experts in this realm of fashion. Yzma from The Emperor’s New Groove is the avant-garde queen among the Disney villains. With her feathered mane and headpiece she shows that having a peculiar look isn’t bad at all, but refreshing. The Fashion Police would totally put her up against Ursula to see who pulls off the palette of purple and black the best.

Fashion is all about theatrics and Maleficent knows how to throw a show. From the horns to the green fire, girlfriend knows how to make a grand exit. Maleficent’s fashion sense just gets better over time with the 2014 live-action film Maleficent. Angelina Jolie wearing those horns just makes this villain’s style even more chic.

Captain James Bartholomew Hook dresses more like a king than a pirate. He looks like he could be King Louis XIV of France’s twin brother! Even though he is on a ship with a bunch of smelly, underdressed pirates he dresses exquisitely. Don’t be fooled by his luscious locks, puffy sleeves and white frilly cravat: he has a mean left hook!

Cruella De Ville is the epitome of fashion in the Disney villain crew. The black and white hair, mink coat and red gloves make her a fashion icon. She is cut-throat and ruthless to get what she wants, which is literally an article of clothing. Dalmatians beware of this woman! She literally will kill for fashion and if that doesn’t put her on the top of this list then I don’t know what will!

So there you have it! Here are the most fashionable Disney villains ever created. They may be all types of wrong, but the one thing that these evil characters do get right is their wickedly good fashion sense.

What other Disney villains have a style to die for? Share your answers on the comments below!