Sasha Lanser knows only too well the magic Disney On Ice can create: she skates as the iconic pixie Tinker Bell in the show.

In an interview with Sasha, I asked about her time and experience with the touring company. She responded with all the energy and happiness we can expect from the spunky and curious tinker-fairy. 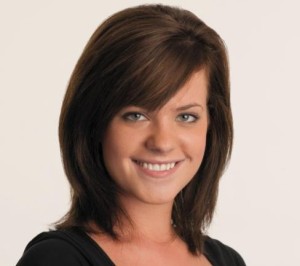 T: How did you come to be part of the show?
S: I auditioned in Nottingham, England, where I was living at the time. I had never seen the show before; I just heard about it and went for it.

T: What made you decide to audition?
S: I actually took a break from skating and when I wasn’t on the ice, I missed it. That was what made me want to go and audition.

T: How did you feel on the day of your audition?
S: You feel nervous, but once you start getting into what you’re doing- I was having so much fun at my audition; you forget it’s an audition and have fun and just enjoy it and remember why you love to skate. And the auditions were out there, but Disney was the one that stuck out for me.

T: What was the reason Disney stuck out to you?
S: How great the travel is, and I’ve been a big Disney fan since I was young so it just checked off all the right boxes.

T: What was the audition process like?
S: You go in and show them everything you can do, express your personality and from there then assess where you’ll be going in the show.

Sasha auditioned on a whim and landed the part of Pixie Hollow’s favorite fairy Tinker Bell at Disneyland. We asked her more questions about her role specifically, such as how she felt about playing the iconic fairy. “Oh my gosh, yeah! I love it!” she replied. Still, that didn’t keep her from auditioning for other dream roles.

We then began to talk about performance and finding roles. Sasha explained that had been looking for opportunities to continuing skating for quite some time: “I finished competing when I was younger and I wasn’t done skating, I really wanted to do shows. It was my first show, but I had skated for 18+ years; this seemed like the next step in my career.”

With such a career, you can expect that the definition of normal life can be a little different (just like Tink).

T: What is a typical day like for you?
S: We make sure we have a really good warm up or sometimes skate before the show. There’s a lot to do before actually getting ready for the show. It’s a hard schedule, there’s a lot more that goes into it before the skaters are brought in. It can be long days, there’s four weeks of rehearsals that we do before we open. But it’s totally worth it in the end.

T: How is the performing itself – is it new for you to pantomime so much?
S: You adjust to it and you get used to it; it’s second nature to me now, I don’t even think about it anymore. As soon as I’m in my wings, I’m no longer Sasha; I am Tinker Bell.

T: What is the schedule like for you on tour?
S: We normally have Monday and Tuesday to rest and regroup. We usually open on a Wednesday or Thursday every week and then close on a Sunday. 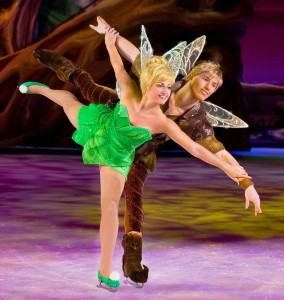 Tinker Bell is a busy little thing not only making appearances at Disney Parks around the world, but also skating in the touring ice show. When we asked Sasha about her schedule, she replied “yes, she is busy…she’s so busy.”

T: Now, you mentioned touring before; where have you been?
S: I have been with the show four years now; two years in Europe, and two here in the States. I have not had the opportunity to go to Asia yet, but hopefully in the future.

T: Where is your favorite place to perform?
S: In South Africa. I’m actually half South African. It was really nice, my grandma got to come see me skate for the first time. She had never seen me on ice before.

She also spoke about her own experiences with the cast and working for Disney. Oh, Disney On Ice, making memories even for the cast and crew! “You’re not just a performer,” Sasha says, “You’re with a massive family. We all travel together, we celebrate birthdays and all the holidays together, we go through good times and bad times together. It’s a really nice group to be a part of.”

T: You had never seen the show before you auditioned, have you seen it since?
S: I have – It’s really nice to see everyone’s hard work come together and to see the whole show as a one. It makes you so proud.

T: Do you act that way when you go to the Disney Parks?
S: Anytime I get to go to Disneyland, it’s like I’ve never been there before. I just get so excited when I get to see Minnie or Mickey, any character really. I get excited!

T: How is it being with the company?
S: Being with Disney is more than I thought it would be, it’s amazing. I’ve had so many opportunities to see the world and I think it is just the best experience anyone could dream of really.

Be sure to see Sasha and the rest of the performers in Disney On Ice, coming to Los Angeles from April 15-19 and Ontario April 23 – 26.