Last week, some of our team got to visit Ontario, Calif. for the Southland premiere of Disney On Ice presents Worlds of Fantasy. We also had to opportunity to bring along my aunt, Raksa and her 5-year-old daughter, Leiya to help us determine whether the show is parent and kid-approved.

We first meet Mickey and his friends driving in a car until something unexpected happens. Luckily, a familiar face – or should I say car – is there to save the gang. The 2-hour show features Disney stories that include Cars, The Little Mermaid, Tinker Bell, and Toy Story. 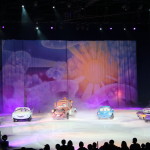 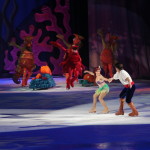 Brace yourself for pyrotechnics and bubbles as Lightning McQueen and his friends race across the ice, and Ariel, Sebastian, and Flounder take you under the sea. But keep your voices down. The wicked Ursula may just appear to steal someone’s voice.

After these first two stories, a short intermission will give guests enough time to grab popcorn, food, souvenirs, and bring your little ones for a bathroom break. 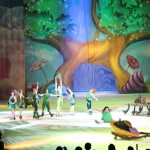 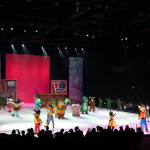 We are then taken to a different world of fairies in Pixie Hollow to find out how Tinker Bell faces a problem of no longer wanting to be a tinker anymore. One the other side of Sunnyside Daycare, the toys are back in town! Toy Story’s Woody, Buzz Lightyear, Jessie, and friends escape from daycare and are in for an adventure as they try to race home.

With a range of films that were accompanied by songs, from new to old, there is a part of the show for everyone.

In the end, we think you’d rather learn about how the show really was from our mother-daughter duo. Here’s what Leiya and Raksa had to say about their experience at Disney On Ice:

If you could use one word to describe the show, what would it be? 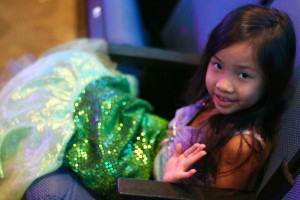 Out of five stars, how many would you give the show?

What was your favorite part?

What was your favorite song from the show?

L: That’s a good question. Woody and the Tinker Bell song. (“You’ve Got a Friend In Me” and “Fly to Your Heart”)

R: I really liked “Part of Your World.” 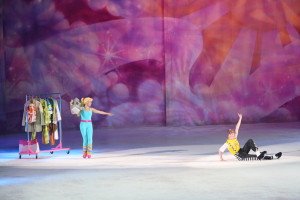 Was the show too long?

Would you want to watch the show again?

L: Yeah. I want to see Rapunzel, Beauty and the Beast, and I want to sit closer.

R: Yeah, it’s a really good show. I just wished when Ariel came out, she would be in her shell. But the way that they set up everything made it a good story because there were good transitions. And Ken was also funny and entertaining.

Sounds like this show has gotten a parent and child approval! Be sure to check out when Disney On Ice presents Worlds of Fantasy is in your city HERE.

Our thanks to Disney on Ice and Feld Entertainment for hosting us that night!