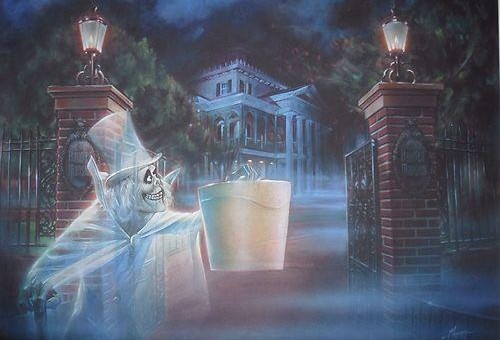 As you all know by now, the resort will take entertainment to new heights by giving guests both experiences they’ve never had before and not all of them are brand new. Although much of the Celebration revolves around the new nighttime entertainment, some other surprises have also been announced that you can experience any time of day.

One of those surprises being the return of the mysterious Hatbox Ghost to the Haunted Mansion. We’ve all heard about the Hatbox Ghost, but do you really know about him?

In 1969, a ghost described as “an elderly man wearing a cloak and top hat, leaning on a cane and clutching a hatbox” appeared at Disneyland’s Haunted Mansion attraction. According to Haunted Mansion lore, the estate hosted 999 “happy haunts” though there were 1,000 rooms for anyone willing to volunteer. Originally, that last room belonged to the Hatbox Ghost who made his presence known to few before his untimely exit for unforeseen circumstances.

In reality, the Hatbox Ghost was an Audio Animatronic figure created by Walt Disney Imagineering that could be seen in the Mansion’s attic right before guests exited to the graveyard. His head was supposed to vanish from atop his shoulders and would reappear inside the hatbox, but this unique effect did not work as planned and so was quickly removed. Since then, the he has become a Disneyland icon that was never forgotten.

And that leads us to today as we eagerly await his return nearly five decade later.

It’s about time the Haunted Mansion was a full house again and with the materialization of this famous Happy Haunt. In fact, just in time for a celebration of a lifetime. Literally!