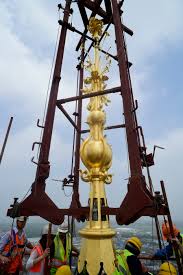 Ever since it’s announcement, the castle for Shanghai Disney Resort has been teased with other announcements saying that it will be the largest Disney Parks castle ever created.

Just a few hours ago, it all became true when the finial, the decorative item that tops the highest spire, was put into place making the Enchanted Storybook Castle the tallest Disney Parks castle in the world.

The design of the castle is a combination of the different Disney Park castles you can find in Disney’s other parks around the world. Beyond having the tallest atrium and its own attraction inside of it, this castle is even made more unique thanks to the golden finial itself.

The finial incorporates the golden peony, the flower of China, that is “placed atop a cascade of Disney stars shooting out toward the heavens from the central spire, evoking the optimism that, with belief and a little magic, dreams really can come true.” This finial joins another larger golden finial, installed recently on a separate tower of the castle which includes other unique Chinese elements including traditional Chinese cloud patterns, peonies, lotuses, and a crown representing Shanghai culture and royalty.

The placing of the finial marks yet another construction achievement as crews continue creating the resort which is set to open in spring 2016.