Did you know that Disney is recognized as the world’s largest producer of fixed-base fireworks shows? So it’s no exaggeration to say that Disney and fireworks seem to be made for each other!

Disneyland premiered its first fireworks presentation in 1956 a year after it was opened. The first shows were originally hand lit by employees. However, by the 1960s, an electronic system was developed for firing the shells. Shortly thereafter, the popular entertainment spectacles were carefully synchronized to a musical soundtrack. 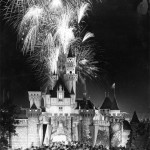 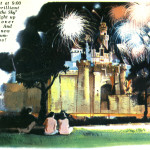 One of the most popular fireworks show was Fantasy in the Sky featured from 1958-1999 with short engagements in 2004 and early 2015. In 1958 in order to keep guests at the park for longer hours, Walt Disney wished for there be night-time entertainment, he requested a fireworks show to be displayed against the background of the Sleeping Beauty Castle.

Since 2000, Disneyland fireworks have become more elaborate— the shows are not only synchronized with Disney songs but there are new launch techniques and story lines as well features of both Tinker Bell and Dumbo flying high overhead above the Sleeping Beauty Castle.

In late 1999, to celebrate Disneyland’s 45th anniversary, the Disneyland Entertainment team produced a lavish fireworks production to replace Fantasy in the Sky called Believe…There’s Magic in the Stars. For a brief stint from 2004-2005 Disneyland hosted the fireworks spectacular Imagine…A Fantasy In The Sky.

It was however later replaced with a special fireworks extravaganza, Remember…Dreams Come True, in 2005 to honor Disneyland’s fiftieth birthday celebration. It was the most expensive fireworks show Disney has ever developed; it included shells being decorated all around the park, as well as pyrotechnics and creative lighting. 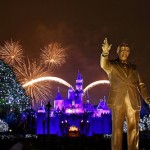 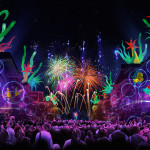 For the Diamond Celebration, Disneyland is debuting a new fireworks show called Disneyland Forever to continue the nighttime tradition in a bigger, better way. Featuring new types of fireworks and an immersive projection and spotlight system, the new show will use all its facets to share the story of Disneyland through Walt Disney’s eyes.