“The future of play is coming.”

That greeting was at the center of the email invitation we received from Disney Consumer Products a few weeks ago and today, we got to see exactly what that future looked like.

At today’s special presentation in Los Angeles, Disney COO Tom Staggs along with new chief of Disney Consumer Products Leslie Ferraro unveiled Playmation, a new playtime system that includes wirelessly connected toys and wearable technology combined with Disney’s unmatched franchises. It’s a whole new category of “toy” system that was designed to use one’s imagination and personality to make it all work.

“Innovation and creativity are the driving forces behind Disney, and our goal is to inspire children to unleash the power of their imaginations through the stories we tell and the experiences we create,” Ferraro said, “with Playmation, we’re taking the next step in that tradition – bringing the worlds of play, storytelling, and technology together – in a new and very exciting way.”

That exciting way was demonstrated to be one part technology and one part your own personality. Playmation is basically Disney Infinity taken out of the video game realm and put into our real one. In both cases, the user is indeed a player, but Playmation takes the controller or keyboard out of their hands. Instead, the user plays an active role by wearing smart accessories that tell you how to play.

If it sounds confusing, it really isn’t. Like any game, instructions are given to create that sense of play. The Playmation system does so in a more immerse and entertaining way by utilizing Disney’s characters and worlds.

Like Disney Infinity, Playmation’s lifeblood lives with its connection to Disney’s franchises, setting the backdrop for playtime. As was shown as an example at the event, Marvel’s Avengers will be a playset where you could become Iron Man…and not just on a screen. You literally become the character when you strap on your Repulsor glove. When you do, you’ll also have J.A.R.V.I.S. to guide you through multiple campaigns instructing you as you dodge lasers, shoot enemies, and run away (or perhaps towards) danger.

All literally – as in you don’t use a controller to do all those things. You are the controller, using your imagination to make playtime happen; hence the name Playmation. No screens needed. It’s just you and your Playmation gear.

One can get a better sense of all this in action in the video above, but it’s easier to understand if you just try it yourself. I had the chance to do so after the presentation and it just all clicked. It reminded me of my own childhood where we’d play “pretend” and create our own worlds and characters that were appealing to us. We used toys from our collections as our personas and crafted props to further our make-believe even more. That was playtime for me, a 23-year old working professional. 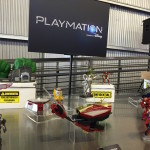 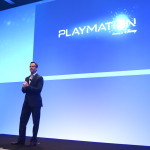 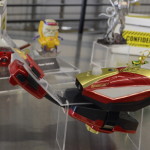 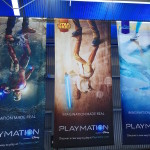 The moment I put on Iron Man’s Repulsor glove though, I went back to those days of being a boy with toys and had a few minutes of playtime fun. All you have to do is put on the gear and go have fun.

Today’s children might define playtime as an inactive role, like getting the best Instagram posts, binge watching on Netflix, or Xbox-ing all day long, but Playmation seems to take the inactive and combine it with the active definition of getting up and doing something that I and my parents enjoyed and benefited from.

It was that mindset that led Disney to conduct an independent study that showed that an overwhelming amount of parents feel “nostalgia” for their playtime memories and wanted something that could recreate that for their kids today.

“The study highlights a major opportunity to meet the needs of both parents and kids with a new way to play,” said Kareem Daniel, Senior Vice President, Strategy and Business Development. He continued, “Playmation uses technology to make active, physical play even more fun.” In other words, Disney has now used the very thing that declined playtime in this age to revitalize it in this age and beyond.

Call it a smart business strategy to make people buy a product, but it seems to have worked for those who attended the event and got to try Playmation themselves. It’ll only be a matter of time until kids and their parents will find the same gratification in taking Disney’s definition of next-generation playtime.

Playmation, powered by Disney, will roll out slowly throughout the year. Just like Disney Infinity, playsets each featuring one of Disney’s iconic franchises will become available. Marvel’s Avengers playset will be made available first with pre-orders beginning in July for an October release this year retailing for $119.99. Star Wars and Frozen playsets will be made available in the next few years once the new system connects with consumers – and Disney is betting they will.

“We’re creating a whole new way to play and we hope you’ll come play along with us,” said Tom Staggs.