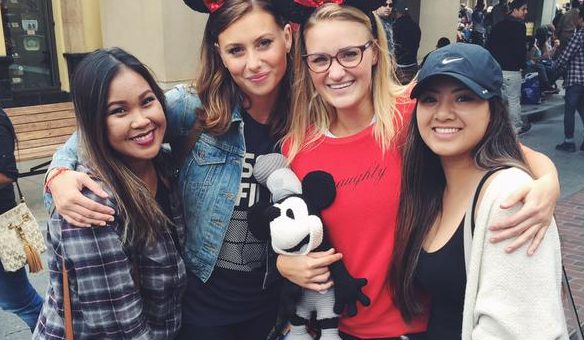 In celebration of the Disneyland 60th Anniversary festivities, it’s only appropriate to see which famous folks made a visit to the parks to check out the bedazzled Resort. It’s time for another wrap-up of celebrity sightings thanks to our friends at DisneylandCelebs!

Aaron Paul, Breaking Bad‘s Jesse Pinkman was breaking good when he stopped to snap a picture with a fan at the Esplanade.

Ken Jeong, The Hangover‘s Mr. Chow seemed to have a zip-a-dee-doo-dah time before venturing on Splash Mountain. He was also seen taking a spin on the cups at the Mad Tea Party that day!

Parks-goers spotted Nicolas Cage at Disney California Adventure. A celebrity-sighter also saw him exiting the Haunted Mansion at Disneyland! I wonder what he thought about the new Hatbox Ghost.

Coldplay’s Chris Martin may not have been singing his way through the parks, but he gladly took a selfie with his fan.

Aly and AJ Michalka joined in on the fun at the Disneyland 60th Anniversary 24-hour event and made sure to stop and take a picture with their fans on Buena Vista Street.