At the center of Disney•Pixar’s Inside Out are the main characters – emotions! These personified versions of feelings play a large role in telling the story of the film set in the mind of an 11-year-old girl. When one is tasked with playing the emotions of such a person, you would think that there would be a fantastic cast bringing it to life, right?

The funny ensemble also gave the gather media at film’s press conference evidence of why they should be playing that particular emotion in the film.

Mindy Kaling said she was perfect for the role of Disgust because the character showed “a lot of qualities of a very impatient, judgmental adolescent girl [and] I seem to be playing that role over and over in my career.”

“My family argued all the time,” said Lewis Black who plays Anger. “That’s what we did. That was the way we expressed love…it is always kind of been a part of me. That and my mother couldn’t cook.”

Bill Hader said he was the right person to play Fear because he’s a “big whimp.”

When it came to playing Sadness, Phyllis Smith said she is “a mess” and a “real sad sack.”

Amy Poehler plays the lead character of Joy, which she thought as easy to play due to her personality, too. “I think there are some characteristics of Joy [I have]. I aspire to be more like Joy, actually. More joy from me!” 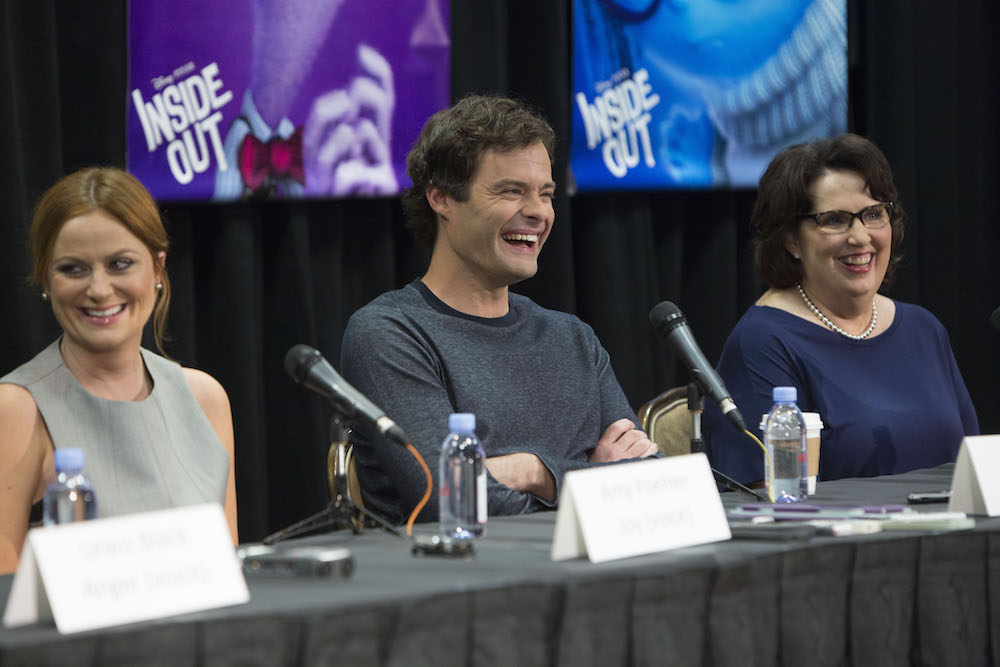 On the other hand, all of them thought that they could play the other emotions as well.

Poehler, Hader, Smith, and Kaling all would have liked to play Anger. “It’s just very theraputic, you know,” Hader continued, “I just felt like when I was watching Lewis’ thing I’m like “god, it would be nice just to go into work and be like AAAHHH.”

All the funniness aside, things turned a little more serious when the simple question of what it was like to be in a Pixar film came up.

“To make a movie like this…it’s like the big risk, big reward philosophy of Pixar,” Poehler said. “That’s what’s so great about Pixar,” Hader added. “They trust their vision.”

Kaling also felt that trust gave them a lot of time to just enjoy the process of making the film. “A lot of people hear we have to create our own opportunities as actors, being the orchestrators of our own projects,” she said. “To be a part of something where you don’t have to because the standard of excellence is so high…it’s such a treat.”

The stars made it clear that their treat would be the audiences’ treat as well when it comes to enjoying their film. Poehler said “Pixar doesn’t patronize their young audience and they don’t underestimate the intelligence of their audience. They assume your big brain is going to show up and your big heart…and you’re so rewarded when you do.”

“I think what’s so great about this movie is that [Pixar] chose to make a film about a time in [our] lives that we all have to go through – when you go from being young and then…to an adolescent and things start to change and get a little hard for you,” said Hader. “A lot of normal movies don’t talk about that.”

He continued “I wish I had [this film] growing up. My life would have been easier I think if this movie existed when I was a kid.”

Whatever that means to you, one thing’s for sure – “Inside Out” will bring out that kid in you.