It has been a few weeks since my family and I ported back into Vancouver after experiencing 7 days aboard the Disney Wonder to Alaska. My first Disney cruise (like all other Disney Parks and Resorts offerings) was touted as one that would create “memories of a lifetime”, and so I needed those few weeks since to really think about that before I could start writing.

The best way to see if the well-known Disney standard held up was to use it as a lens when looking at each of things that make up a Disney cruise. So that’s what we’ll do!

We’ll be touching on seven areas in total, but we’ll start off with the three that you experience from the very beginning of your voyage – Service, Atmosphere, and Staterooms. 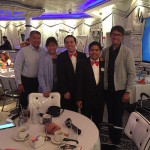 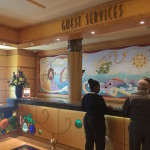 Disney’s standard of service has set the standard for all other leisure-centered operators since the first days of Disneyland. That standard hasn’t been forgotten on Disney’s cruise ships, but perhaps has been challenged in itself!

Even before the sail date, each guest receives a nice bounded book that gives you everything that you could possibly need and need to know before you depart your house for the port. The book outlines everything from your itinerary and tickets, some onboard offering highlights, and even recommended packing lists based on where you’ll be sailing to.

Once you do have your bags packed, the service continues on a more personal level when you arrive at the port. Although you’ll most likely be checking in with thousands of other cruisers, the process is straightforward, but might be the wait of an average attraction line at Disneyland. Once you’re all checked in by the very kind cast members though, the real service begins.

Just like Disneyland, the cruise ship’s “cast members” play a vital role making sure that the guests aboard are having a magical time. As you board the ship, a cast member and a welcome committee of sorts asks you for your last name. Why? Because seconds later your family/party is formally announced on the ship’s PA system welcoming you aboard. How’s that for a magical entrance?

Those magical moments of service don’t end with that kind gesture! This is seen in no better place than when you have dinner. In a first-of-its-kind move, your dinner service wait staff cast members rotate with you as you dine aboard the ship’s different restaurants. It may seem like this isn’t drastic change, but these cast members will get to know you and your habits as the cruise goes on. They very much become part of your family and I can’t think of any better way to experience world-class service than with people who make you feel like that way.

Before you physically eat aboard, you’ll probably be doing more eating with your eyes as you quickly step into the grand atrium lobby at the center of the ship after the announcement. Like any other first-time experiences, what you see first will usually set the tone of the entire cruise. Disney seemed to have thought of that when they created the design of the ship, especially in things like the grand lobby. 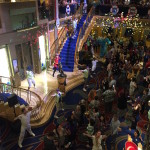 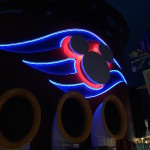 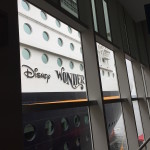 Like most of Disney Parks and Resorts’ other products, nothing should really feel out-of-place, based on the context of where you are and what you are experiencing. In other words, when you step aboard a cruise ship, you should feel like you stepped aboard a cruise ship.

As I wrote prior, Disney Cruise Line wanted to challenge the model of what a cruising experience was like in every detail, which also included design. When you first see the exterior of any of the ships, you can see that it’s not Disney-fied with characters painted everywhere. You see a ship that very much resembles the “ocean liners” of years past like the Titanic. No, they don’t want you to think of sinking, but they most certainly want you to think of how luxurious it was aboard ships at the time.

You will feel that luxury both inside and out. The grand lobby itself is accented by fine woods, marble floors and ornate glass. If you look closely enough, you’ll pick up little Disney references like hidden Mickeys on the carpet, or the bronze statue of Ariel, or another famous Disney character that graces the grand staircase. It’s all meant to complement the experience of being on a luxury ocean liner, not overpower it. Still, it wouldn’t be a Disney cruise without extras hints of Disney and you’ll certainly get that in the kids play areas and many Disney character appearances.

After an hour or two exploring the ship for the first time, it may be wise to finally head to your stateroom where the luxury and the Disney-ness continue. 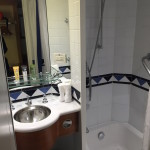 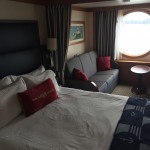 During their research for the design of the Disney cruise ships, surveys were given and many of them included the comment that cruise ships had poor accommodations. Even today, cruise ship cabins and staterooms are likened to that of being on an airplane – cold, cramped, and boring. Going off their original intention, Disney went on to create everything opposite to that.

The results are what Disney thinks is the most spacious and luxurious staterooms aboard any cruising vessel. Since my family and I had never been on a cruise before, we really couldn’t compare it to the others, which in turn gave us an interesting perspective.

Overall, we thought that the staterooms were reasonably sized. Our stateroom had a single, full queen-sized bed, a full-sized sofa convertible, coffee table, vanity area and two bathrooms (one room for the shower and one for the toilet – genius move especially for families).

The room did have a lot of features, but the features didn’t overcrowd our ability to live there. However, it still felt small when walking around the room which took some maneuvering around things like the queen bed. Even the more expensive staterooms with a veranda in the upper decks were small in comparison to an average hotel room, but there’s only so much you can shove into a boat.

Disney should still be recognized with at least making the effort of creating an above average environment to relax in. And that’s something you’ll be doing a lot of while aboard your Disney cruise. Once your ship leaves port, it’s going to feel overwhelming to do everything aboard the floating Disney city. With all the restaurants, shops, and entertainment offerings, you’ll want to relax!

You can relax now, though, knowing that the cast members around you and the ship that you’re on are all ways to make those “memories of a lifetime” happen. For this guy and his family, they sure have made those memories in the first few hours we stepped aboard.

Look out for part 2 of my Disney cruise review that will focus on entertainment, food, shopping, and other amenities onboard!