While any trip to Disneyland is a celebration, this year there have been many reasons to celebrate.

Located on the park’s Main Street U.S.A., the restaurant is the ideal place to dine while having a great view of the fireworks. The restaurant enhances its guests’ experiences by being the only place that schedules cast members to create magical moments for diners.

Cast member lead Steve Valkenberg has a personal goal of creating at least one magical moment for guests before going home every day. 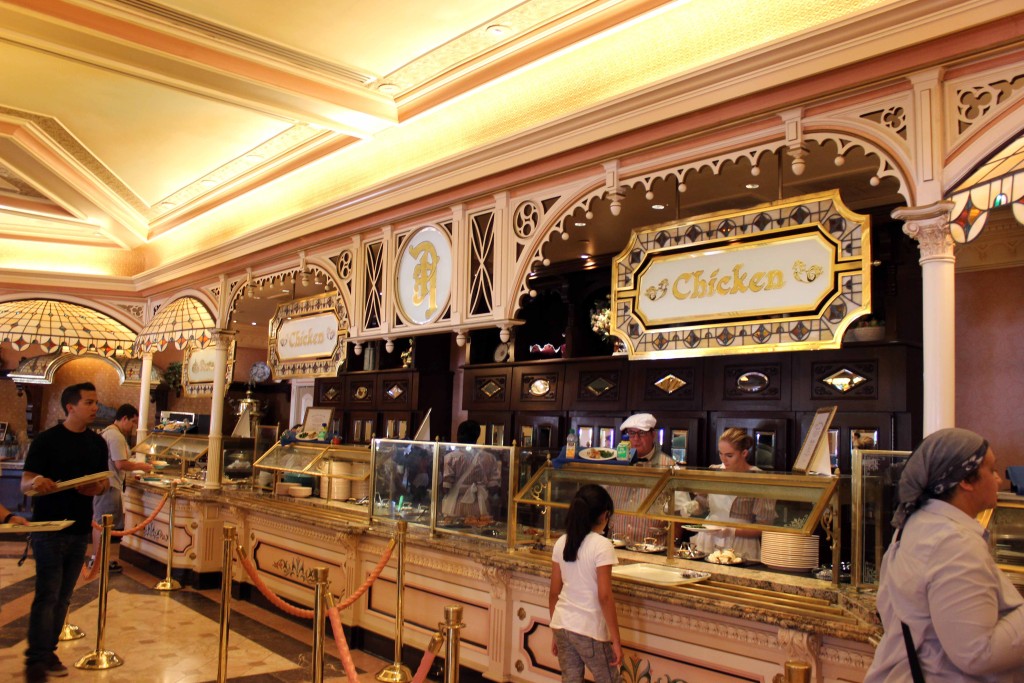 While guests are there, they are also likely to encounter Moses. Moses is an employee of the Plaza Inn with a legacy pin. A legacy pin is the highest honor a regular cast member can receive. The selection process includes a committee that chooses the recipients. He can be seen walking around making magical moments, whether it be handing out buttons, flowers or just being himself.

“You feel like you’re in a very special place,” Valkenberg said. He continued that the cast members are there to have fun and entertain guests, not to shove food at them. Guests and cast members alike love the Plaza Inn, which has the lowest turnover rate in the park. Some cast members have been there for 20 to 30 years.

In the event that the restaurant is at capacity and people have to line up outside, cast members go out to talk to guests. They bring out the “Dazzle kit,” which contains tiaras, signs and other goodies that guests can take pictures with. 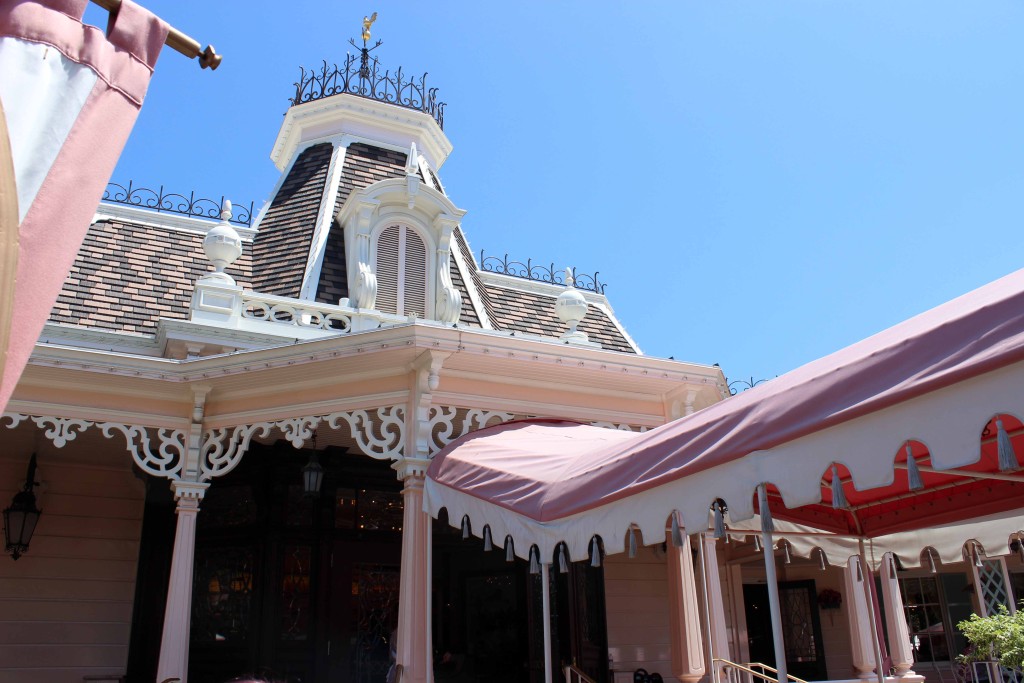 Plaza Inn’s facade was actually a home purchased and moved to the park.

The restaurant was formerly known as the “Red Wagon Inn” when the park opened in 1955. It was refurbished into the Plaza Inn in 1965. Walt Disney intended for the restaurant to be the most fancy dining that was also enjoyable for the whole family. Before Club 33 and the Blue Bayou existed, Walt would close down the restaurant to invite special guests to dine. 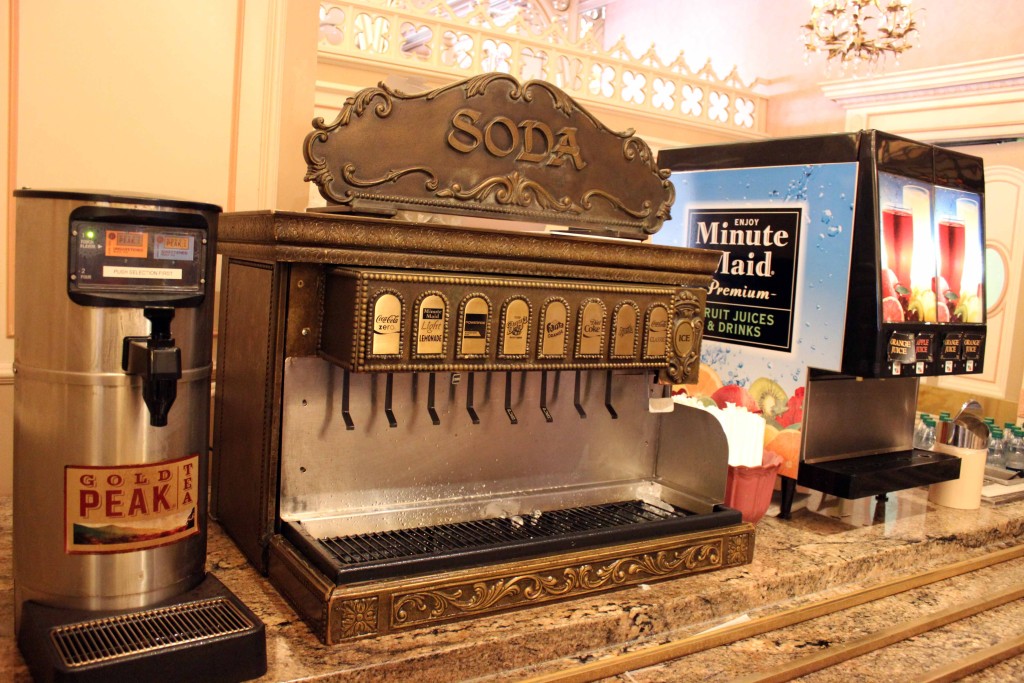 The soda machines exteriors are actually wood that was hand-painted to appear bronze.

The restaurant features a Victorian stained-glass ceiling which is known as “Tiffany-Style paint.” Its marble foyer and ornate gingerbread woodwork were salvaged from an old home in the St. James Park neighborhood. The restaurant’s soda machines appear to be made of bronze, but are really made out of wood. The cabinets in Plaza Inn originally had Lillian Disney’s personal belongings stored in them.

While this place has impressive and grandeur architecture, its meals are what entices people at Disneyland to step into the restaurant. 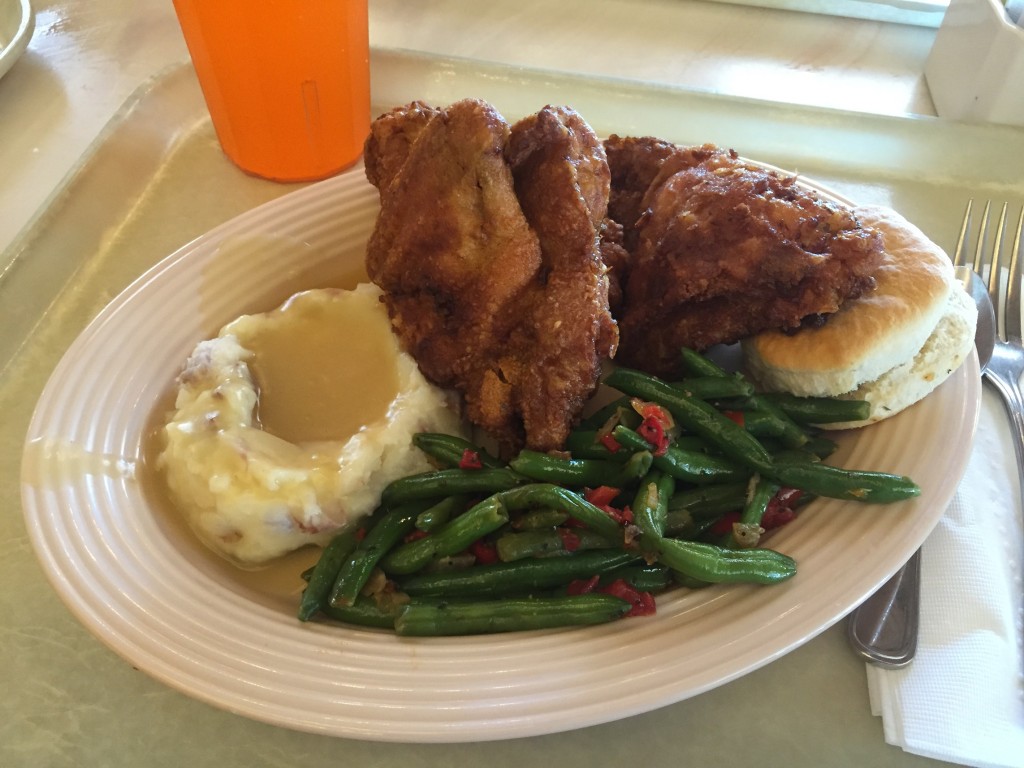 It isn’t fried. It’s broasted. And you can only get it there.

Throughout its history, the Plaza Inn has been known for its chicken. Baked chicken was served when the restaurant opened, then rotisserie chicken was offered later on. Today, diners can enjoy a large serving of “broasted” chicken, which is served with green beans, mashed potatoes and a biscuit. Mark Doi, head chef of the Plaza Inn for about 20 years, is responsible for perfecting the special recipe for the broasted chicken. It is so delicious that chefs from Walt Disney World have visited to taste Doi’s chicken, but they have yet to successfully replicate it.

The broasted chicken has been a fan-favorite for many years, but there was another menu item whose stay was significantly shorter. There was once a menu item called Kettle Favorite, a pastry filled with meat or veggies, that remained for 6 months before being removed. If you look closely, you’ll still find the $5,000 stained-glass sign for it.

The menu also features items such as pot roast and penne pasta with marinara. For diners that prefer salads, the restaurant serves a Cobb salad and vegetarian house salad. If you’re craving fish, the Plaza Inn also serves the “Fresh Catch of the Day”. Those with food allergies can enjoy the these foods also because the Plaza Inn was the first restaurant in the park that modified orders for guests that had allergies. They even offer Kosher meals!

Once Plaza Inn guests are finished with their meal, they can top it off with a dessert such as their decadent chocolate cake or carrot cake. 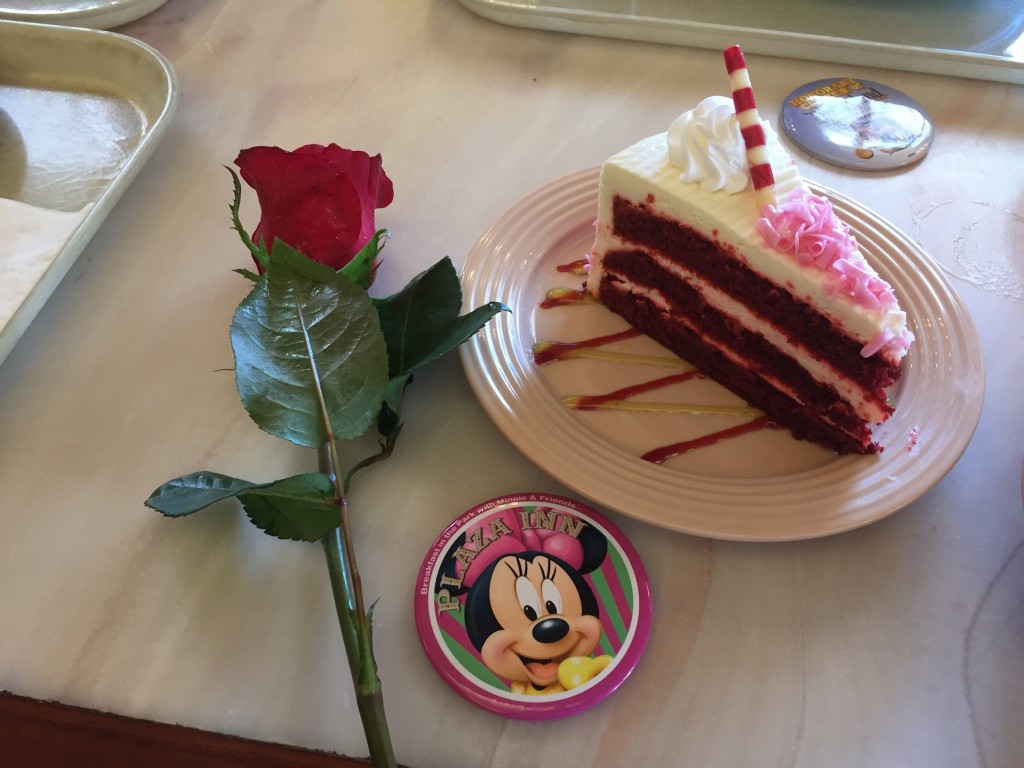 The restaurant also serves as a popular character breakfast location for guests. During “Minnie & Friends – Breakfast in the Park,” you’ll find a buffet that offers Mickey waffles and fresh baked pastries. Other breakfast items include bacon, scrambled eggs and sausage. French toast and cereal are served as well. Characters such as Minnie Mouse and Captain Hook visit each table to interact with guests. Diners are encouraged to take photos with the characters and ask for autographs.

The Plaza Inn has maintained similar prices, adjusted for inflation, as when it first began. Guests are also given a large portion of food to keep them happy. However, there are some challenges for The Plaza Inn. Seating is limited and it can get crowded. But in 50 years, Valkenberg says he sees the Plaza Inn growing by having more room and new signs.

All in all, The Plaza Inn has and will continue to entertain guests with their food, as well as their service. People stop by for the food and stay for the memories- and what better way to make lasting memories for Disneyland’s 60th anniversary than to enjoy a restaurant rich in history.

Here’s to 50 more years and a lifetime of broasted chicken!