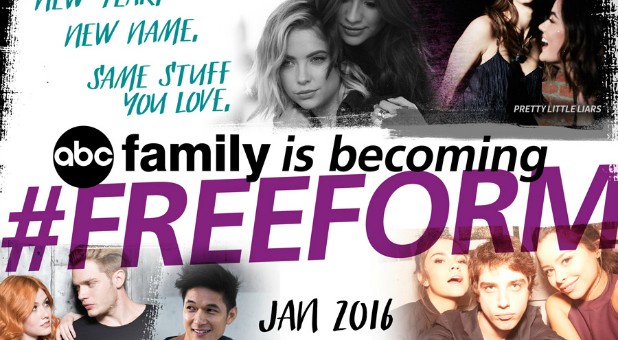 After sifting through 3,000 names and extensive market research and testing, ABC Family will change its name once again to better identify with their shows and audiences.

Freeform will be the new name of the channel in January 2016 with new marketing debuting the brand change happening this month. The rebrand will shift the focus on what ABC Family president Tom Ascheim calls “Becomers” or their target demo of viewers ages 14 to 34.

“It really spoke to these three core parts of our essence: the audience, this idea of becoming a Becomer,” Ascheim tells The Hollywood Reporter. “This moment in media, where it was not just a linear moment but a back-and-forth one between the audience and content maker, because they, too are content makers; and it seemed to evoke an emotional response in us and our creative selves and made us feel like we would be able to convey the spirit of Freeform to the audience — and they’d want to play along with us.”

This will mark the first time that the cable channel will not have the word “family” in its name. When the channel was founded in 1977, it was called CBN(Christian Broadcasting Network) Family Channel focused on religious content. It was sold to Fox in 1998 to turn into Fox Family. It wasn’t until 2001 that The Walt Disney Company bought the channel from Fox to turn it into ABC Family.