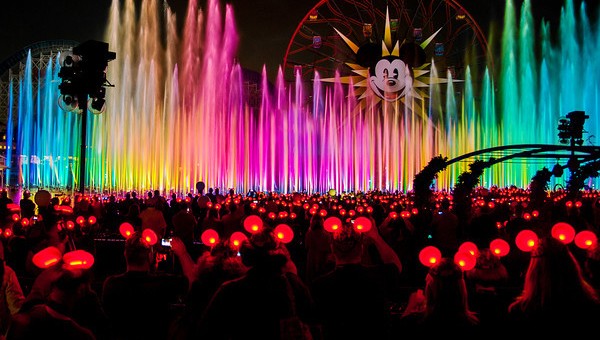 World of Color is a nighttime spectacular that has captivated audiences for a little over five years. As the years went by, guests would see new segments to promote upcoming movies such as Pirates of the Caribbean: On Stranger Tides and Brave. They would also be entertained by very special Christmas versions of show. The newest version of World of Color premiered during Disneyland’s 60th Diamond Anniversary and let’s just say it’s a whole new world…of color!

The original World of Color was a symphony of music with an iridescent water show that perfectly synced with scenes from animated Disney movies. Not to say that the new World of Color doesn’t do the same, but it doesn’t have the same affect I felt when I first watched the original. World of Color Celebrate! showcases the man who made dreams comes true, Mr. Walt Disney himself. He was an inspiration to the world, and this version of World of Color was dedicated to his achievements. Let’s do a quick break down of each version!

Each version of the show has different segments to show that World of Color Celebrate! is not just a sequel but a new show on its own! We decided to see how the fans reacted to the new World of Color and this is what they had to say.

Some fans really liked the new World of Color:

The feeling when you wake up happy because #WorldofColor is sooooo amazing and you finally saw it! ??? #californiaadventure #disneyland

#worldofcolor is a must if you ever go to Disney California adventures! @Disneyland always brings a tear to my eyes. #disneyCaliadventure

While others liked the original version:

@Disneyland 30+ visits this summer, only needed to see #worldofcolor once. #Paintthenight and Forever are way better. Change it back please!

Watching the newfangled #WorldOfColor. If I wanted to watch a documentary about #WaltDisney, I'd have tuned in to PBS tonight instead.

Whether you love the original or new version of World of Color they both have a story to tell. The original being about dreams coming true and the new version being about the man who made those dreams come true. While I favor the old one more than the new one I can see why World of Color Celebrate! – The Wonderful World of Walt Disney is the perfect version to be shown during the 60th anniversary Diamond Celebration.