Halloween Time at the Disneyland Resort is in full effect. There are so many festive attractions to be seen from Space Mountain Ghost Galaxy to Haunted Mansion Holiday. Main Street, U.S.A. is completely decorated with pumpkins along the window displays and Frontierland is getting in the latin spirit with an area dedicated to Dia De Los Muertos. However, one thing that can’t be forgotten is the food. Halloween Time is known for bringing out all of the stops with their pumpkin-inspired food items. Some of them sound like they would be really “pumpkin-y” and others didn’t. Here are our top 6 most pumpkin-inspired food items at the Disneyland Resort and how “pumpkin-y” they were from 1/8 of a ? to a whole ?. 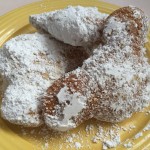 At the bottom of the list at #6 are the pumpkin beignets from the Mint Julep Bar. For the price of $4.49 for three pumpkin beignets, we would rather keep it simple and get the regular ones instead. They weren’t as pumpkin-y as we thought they would have been. The dough wasn’t fluffy, but very crunchy in texture. The pumpkin flavor took a little bit of time to actually taste and even then it was very short-lived. All in all we ranked it 1/8 of a ?. 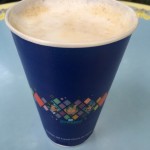 At #5 is the pumpkin spice latte from the Jolly Holiday Bakery. A tall pumpkin spice latte costs $4.79 while a grande is $5.39. Overall, this fall drink was mostly coffee with a little pumpkin flavor in it. It was a little sweet with lots of foam. Honestly it was good for what it was, but not super “pumpkin-y.” We’d give it 1/4 of a ?. 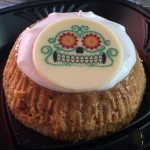 At #4 is the orange pumpkin flan from Rancho Del Zocalo. It costs $5.39 for the flan and was definitely an interesting eating experience. It had a thin orange-flavored sponge cake layer at the bottom, which overpowered the pumpkin flavor. Altogether, it tasted like an orange creamsicle popsicle and even without eating the sponge cake, it had a very small hint of pumpkin flavor. We gave it 1/3 of a ?. 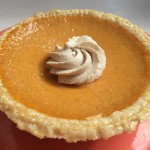 At #3 is the pumpkin pie from the French Market. The pie itself costs $5.39. Eating it was self explanatory. It was very creamy in texture with a light and flaky crust, which was exactly how pumpkin pie should be. We gave it 1/2 of a ?. 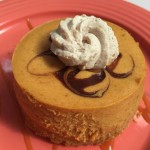 At #2 is the pumpkin cheesecake, also from the French Market. It costs $5.39 and is topped with cinnamon whipped cream. One taste and the feeling of Fall rushed through me. It was very creamy and the plate itself was decorated with a caramel sauce. What made it even better was the graham cracker crust at the bottom. It was very soft, crumbly, and tasted like brown sugar. We gave it 3/4 of a ?. 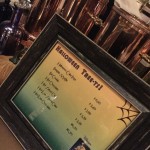 At #1 is the pumpkin hot chocolate from the Disney’s Grand Californian Hotel & Spa. This secret item is found within the lobby of the hotel. This is the epitome of Fall in a cup. It was sweet, but very light. I found myself taking small sips and with each sip, the flavor didn’t lessen. At the price of $3.66 for a grande-sized drink, it was probably the best priced drink at the resort that will be there throughout the holidays. We gave it a whole ?.